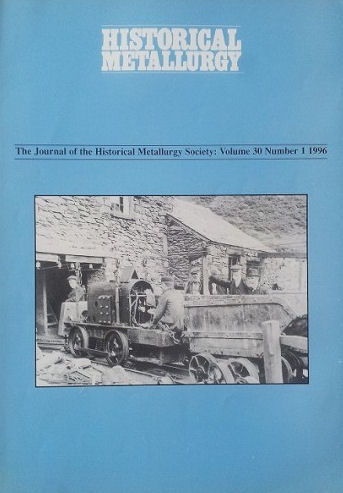 Among the early silver artefacts known from Egypt and the Near East, there is a large group of objects composed of silver bearing up to 30, even 50 wt% gold. The composition of two fragments from silver artefacts excavated in fourth millennium BC contexts at Tell esh-Shuna in northern Jordan relates them to this auriferous group. A review of traditional ideas concerning early west Asian silver, in the light of recent analytical data from both artefactual and geological sources, indicates that some reconsideration is required. The oft-cited suggestion, initially made by Lucas (1928), that there existed exploitation of silver-dominated placer deposits in ancient Egypt, seems a less convincing explanation for the compositional patterns detectable in ancient silver artefacts than alternatives such as mixing as a result of recycling.

The use of antimony bronze in the Koban culture

As part of a program of analyses of Caucasian metalwork in the British Museum, a group of five Late Bronze Age-Early Iron Age Koban ornamental copper-alloy objects were analysed using inductively coupled plasma optical emission spectrometry. They were found to contain high levels of antimony, but had relatively low arsenic, nickel and silver contents. This differs from some other occurrences of antimony bronze which are highly polymetallic in character and are believed to have been obtained from secondary enriched fahlerz. It is concluded therefore that Koban antimony bronze was made either from the co-smelting of relatively pure antimony and copper ores, or from the addition to copper of metallic antimony.

The theory that blast furnaces evolved by stages from the high bloomery, with performance improving and product-quality evolving from white cast iron to grey, as temperatures increased, is challenged. Slags from the earliest blast furnaces already suggest high efficiency, and this is confirmed by examination of 15th and 16th century artefacts. Early blast furnaces were built in areas where wood was cheap or even free of charge, so the opposite development, from high-temperature grey cast iron in the 15th and 16th centuries to white cast iron during the 17th and 18th centuries, when ironmasters faced escalating charcoal prices, a situation from which coke smelting rescued them, seems more likely.

Early Statistics for the iron industry: a vindication

The 18th century statistics for the iron industry have been much used, but inadequately understood. The ‘1717’ list of furnaces and forges exists in two versions, now redated to cl710 and cl715 on the basis of the contents and is probably reliable, but subject to a few deficiencies away from the Midlands. The 1736 list’s estimate of recent production is generally reliable, but its estimate of production about 1718 or 1720 may be somewhat exaggerated by taking the highest figure achieved. The list of 1749 appears to be a hurried compilation relying far too much on the 1718/20 figures. An estimate dated 1788 and estimates from the 17th century are also considered. When each list is examined on the basis of what ironworks are included or omitted, it is found that their compilers’ knowledge can rarely be faulted. Comparison of their data with production figures obtained from other sources, principally accounts, though revealing some discrepancies, tends to confirm these conclusions, but the 1749 list is again found wanting.

An unusual microstructure in alpha-beta brass

An early 19th-century brass part displayed a widmanstatten structure of very fine, parallel rods or needles of alpha-phase brass precipitated ia a matrix of beta-phase brass that had been retained by quenching. An annealing temperature of about 800°C and a fast quench of only a few seconds were estimated from the microstructure.