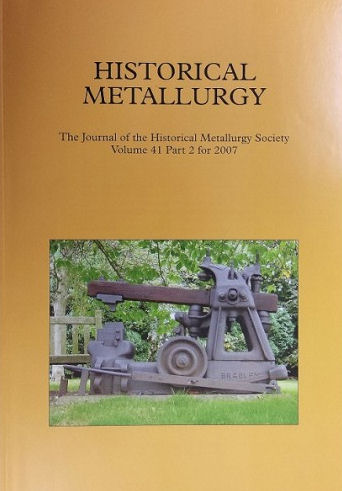 The proposition by Kepper in 2004 (Historical Metallurgy 38(2)) that concentration of silver/lead ores at Laurium (Greece) in the 4th century BC was achieved by a mechanical hindered-settling system is questioned. An alternative arrangement is proposed, of sloping-floor buddies, as used into the late post-medieval period in western Europe; this is seen as compatible with the features recorded on the ground at Laurium.

Laurium and the hindered-settling model of ore concentration: a reply

In the Laurium region of Greece the method of beneficiation accomplished on the 5th- to the 3rd-century EC flat-washing platforms is controversial. The key difference in explanation lies in the role of the stand tank and the adjacent working platform located at the rear of these ancient structures. The tank may be a source of water for the primary separation of finely crushed ore directly on the gently sloping working platform by manual agitation as in a buddle system. Alternatively, the tank served as a settling basin in which the primary separation was guided by the hinder ed-settling model. Gravity does the separation and the eye plays a lesser role in the settling basin approach.

We have investigated goldwork technology by studying working and tool marks, ethnographic and iconographic analogies, written sources and by using non-destructive analytical methods. Our research focuses on the Iberian Peninsula where there is abundant archaeological material dating from the earliest times to the end of Antiquity. We understand technology as a cultural expression inseparable from the social, economic and political context in which it appears, and are interested in technological change, persistence and transmission. Traditional research had not detected the metallurgical use of rotary motion tools until the introduction of Roman technology. We have identified the use of a reciprocating lathe with a horizontal axis for shaping the wax model used in lost wax castings, at least as early as the late Bronze Age, mainly along the Atlantic seaboard. The use of this sophisticated working process appears restricted to specific ritual or symbolic objects in gold and bronze. The synthesis presented is based on the study of Iberian gold hoards. They include the Late Bronze Age Villena hoard, the El Carambolo andLebrija hoards of the Orientalizing period (both illustrating technological transmission and persistence), and the Castro culture gold tores of the Second Iron Age.

English steelmaking in the seventeenth century: the excavation of two cementation furnaces at Coalbrookdale

Paul Belford and Ronald A Ross

This paper describes the excavation of the first cementation steel furnaces in England, built by Sir Basil Brooke at Coalbrookdale early in the 17th century. The coal-fired furnaces were in operation from c1619 to the end of the 17th century, and formed part of a much larger ironworking complex. Excavation revealed the remains of two furnaces and associated buildings, constructed in at least two phases. This paper also includes the metallurgical analysis of refractory materials, as well as discussion about the role of the furnaces in the broader context of English steelmaking of the period.

North Worcestershire, as a centre of scythe manufacture, is placed here in the national context of the industry. The distribution of blade mills in the north Worcestershire scythe district reflects that of the scythesmiths, whose products they sharpened. Blade mills in Chaddesley Corbett can be traced back to the 15th centtiry, and one in Halesowen (perhaps not for scythes) to 1312. The fabrication of scythes was long a manual trade, with water power only used for the final stage, sharpening the blade. However, from the late 18th century, water-powered plating forges began to be used to form the scythe blade.