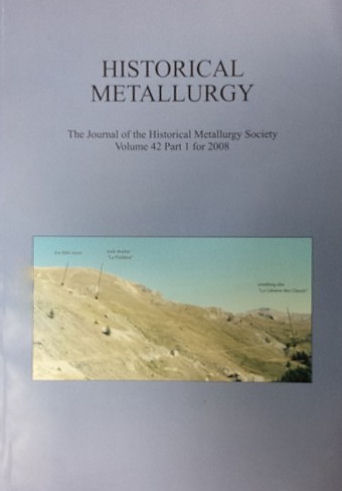 The beginning of copper mass production in the western Alps: the Saint-Veran mining area reconsidered

In the Early Bronze Age copper production increases dramatically, yet in Western Europe little data is available on linked mining and smelting activity. In the area of Saint- Veran, Hautes-Alpes, ancient mining works testify to large-scale production, estimated at some seven tons of metallic copper per year. The associated smelting site, dated to the end ofthe 3rd millennium BC, shows particularly advanced technological skill. The mineralogy at Saint-Veran is an exceptionally massive and virtually single-phase deposit. As a consequence, very little beneficiation is required to achieve high-grade ore. The exploited ore is mainly bornite, Cu5FeS4, which is a particularly copper-rich mineral, compared to the more usual chalcopyrite, CuFeS2. Recent surveys have found large amounts of native copper in the ancient mine spoil heaps so native copper was probably exploited, maybe before the Early Bronze Age. The slag morphology and composition is also discussed. Saint- Veran has thin, homogenous low-viscosity slags, similar to the Plattenschlacke recorded during the Middle to Late Bronze Age in the Eastern Alps. This combination of factors must surely have influenced the early start of copper mass production

In 1937, Pirchegger suggested that gi^eat, or ‘Welsh’, hammers, were introduced from the 1420s onwards at forges in the mountains which separate Austriafrom Styria. Since then most historians have followed him in seeing northern Italy as their source. But the first known forge designated ‘Welsh’was built around 1460 in the parish of Weyer in the Enns Valley of Austria. Smaller Brescian, or north Italian hammers, did not appear in Austria until the 1590s, some 130 years later; this occurred close to the Carinthian border with Italy, a country regarded as ‘Welsh’ by German speakers. However, rather than being of Italian origin, it is suggested here that the I5th-century hammers were Walloon in origin; that the ‘grand marteau’, or drome-beam, hammer (first mentioned in 1395 in the Entre-Sambre-et- Meuse ofNamur) was introduced into Austria during the 1420s, to support the manufacture ofweapons for Duke Albert V of Austria. He needed them to help his patron and father-in-law. Emperor Sigismimd of the House of Luxembourg, in his war against the Hussites.

It is nearly a century since thefirst description of indigenous tin mines at Rooiberg. Sporadic archaeological research has not demonstrated tin mining prior to the mid-2nd millennium AD at Rooiberg, and the presence of tin bronzes at sites such as Mapungubwe and Bosutsweprior to this date could implicate other sources of tin. Nevertheless, all the southern African archaeological tin ingots analysed for their trace element composition are thought to have originated at Rooiberg, but this is not yet proven. The actual technology of tin production at Rooiberg is poorly understood, and is complicated by the production of arsenical copper and possibly also iron in the immediate vicinity. This paper summarises the published literature, presents new analyses of tin and copper production waste collected on a brief reconnaissance visit, discusses the technology of metals production at Rooiberg in the light of these new data, and poses questions for ongoing research.

The purpose of this study is to correlate chemical compositions and metallographic observations from archaeological artefacts discovered at Virginian Native American sites dated between the 16th and 18th centuries AD and expand the dataset available for this type of material. The compositional analyses were carried out using LA-ICP-MS andEPMA, and visual observations were conducted using SEM-EDS and optical microscopy. The presence, absence and types of inclusions in the metal are correlated to the nature of the copper-based metal (native copper, European smelted copper and brass) as defined by chemical composition. In addition, the techniques used to shape the objects have been deducedfrom metallographic observations and variations in the processes according to the type of the metal have been identified, suggesting that Native American peoples adapted their techniques to the new materials imported by the Europeans.

Characteristics diagnostic of mamfactiiring technique are retained in the microstructure of iron nails even though the original siufaces are lost in corrosion. Distinctive metal structures differentiate handforged and machine-made nails. The one-operation machines that automatically cut and headed nails left unique shear hands in the nail-head metal. Presence of these shear hands indicates that nails cut and headed by machine were in use in Rhode Island before 1781. Before about 1815 nail machines in New England operated on pre-heated iron plate, as shown by the recrystallization of the shear band. Nails made thereafter until about 1850 were formed from cold iron and have un-reciystallized shear bands. Cut nails made after about 1850 are in the longitudinal rather then transverse orientation, and have a folded head structure residtingfrom improved design of the nail machine header grips.