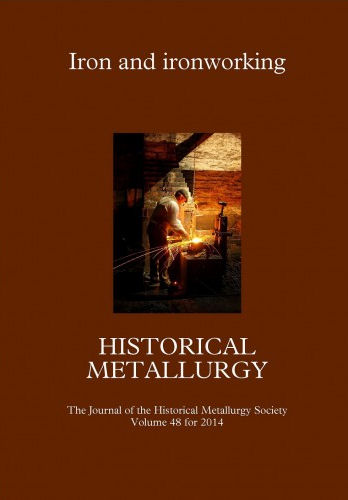 Who's afraid of the bowl furnace?

In 1985 John Dent published a paper in Antiquity outlining the discovery and excavation of three cart burials at Wetwang, in Yorkshire. When the finds were conserved in the British Museum, a small sample was removed from each tyre for metallographic examination. The results were reported internally at the time. Recently the samples were revisited; those from Wetwang Burials 1 and 3 were found to be wrought iron, with phosphorus in both the metal and inclusions, while the sample from Burial 2 contained up to 0.8% carbon, distributed very inhomogeneously. The results are discussed in relation to other studies, and a working sequence is deduced. Shrinking a ring onto a wooden^ rod is described by David Sim in a brief note.

Bloomery ironmaking during the Roman period in mid-Norway

Finds of bloomery sites in the counties of South and North Trondelagin Norway have indicated large-scale ironmaking, starting in the pre-Roman Iron Age and lasting imtil the Merovingian period. The industry was based on rich deposits of bog iron ore. Museum blooms from the period weigh around 18kg and are free from slag as well as sulphur and phosphorus. The carbon content is nonnally very low, but one bloom shows that steel could have been produced. The normal slag has an optimal character when fluidity and refining capacity are evaluated. The use of induced draught created by direct addition of wood is suggested, based on finds and experiments. Slag control of the carbon content of the iron was probably achieved by a cyclic operation. As the output calculated for Tr0ndelag exceeds local needs, export of iron is suggested. Iron metallurgy sheds light on a period of Norwegian history not well covered by other sources.

This paper discusses the results from the geophysical survey of ancient slag heaps in Hamadab in Northern Sudan. The aim of the survey was to evaluate the potential of Electrical Resistivity Tomography (ERT) and Ground Penetrating Radar (GPR) for non-destructive prospecting in arid environments. Complex Resistivity (CR) measurements were taken along five profiles on two slag heaps. The resulting 3D-models show great variation of the CR parameters amplitude andphase. The high amplitudes of between 1.000 and 10.000 Qm correlate with a concrete slag layer on the surface of the heaps. The phase models show high polarisation effects in the interior of the heaps. The GPR results reveal structural information up to 1.5m below the surface. Tilted layers of slag are recognised by high reflection values. Areas of low reflection amplitudes indicate the location of furnaces, which are characterised by high absorption from clay artefacts.

Snake swords and barbed spearheads: the visibility of pattern-welding

Overall there has been little attention paid to how iron objects from the pre-modem era would have looked in so far as surface colour and texture is concerned. Some of this can be deduced by identifying the combinations of alloys, both ferrous and nonfeirous used to form the surface and some studies have examined this. Less attention has been paid to what evidence for the original appearance survives on the objects themselves, largely because archaeological (or any) survival is generally so poor. On its own, this does not amount to much, but used in combination with some fragments ofevidence that can be gleaned from contemporary illustrations, plus early descriptions, it can enable us to say much more especially with reference to specialised decorative techniques such as pattern-welding. Surviving Iron Age to early medieval evidence for the appearance ofpattern-welding in Europe is examined in this study.

In archaeological contexts hammerscale and slag spheres (spheroidal hammerscale) are indicative of iron smithing. Often they are not considered to hold any other information, but scale and spheres are the result of a number of different processes, and analyses can provide more detailed information on the type of work that was going on in a smithy. This paper provides a brief overview of the study of samples from 18 smithies in Denmark, Norway and Sweden dating from the Iron Age to the 18th century. A total of around 2000 hammerscale fragments, and 800 slag spheres, have so far been analysed.

Excavations of smithy workshops are rare, and in many cases the assemblage is split up and its components (slag, artefacts and ceramics) are sent to different specialists. We instead argue that only through analysis of the entire assemblage will the whole picture be revealed. This paper re-interprets the evidence fi’om the smithy at Wharram Percy in a holistic way, setting it in its landscape and considering how it functioned. Three generic ironworking ‘landscape’ models are proposed, all of which can be applied to any site, at any period. Combined metallographic analysis of iron artefacts and archaeometallurgical analysis of the slag, along with the detailed examination of the entire smithing assemblage revealed that the Whai-ram smithy fitted the most complex of our models. The evidence also allows us to suggest the skill level of the Whairam Percy smith. This paper demonstrates the potential of integrated archaeometallurgical and artefact research when interpreting an ironworking site.

One man's waste is another man's obsession: a theoretical framework for the study of ferrous slags

Since archaeometallurgy essentially originated from the unplanned union of two widely disparate fields of study, this new sub field of archaeology was left without a clearly defined framework or research agenda beyond the study of past metallurgy and its associated remains. While the virgin territory that this field encompassed allowed for tremendous progress to be made, the lack of a specific theoretical framework residted in this progress being skewed towards a predominantly technological focus. This paper attempts to establish a clear theoretical framework within which the current parameters of archaeometallurgical research may be expanded, to be more in line with archaeology as a whole. Such a model shall demonstrate the role of archaeometallurgical remains, such as ferrous smithing and smelting slags, within a broader techno-industrial and socio-cultural context, while elucidating the various relationships that exist between technological processes and their products.

Wars of the Roses: battlefield arrowheads under the microscope

Whilst typological studies provide a useful framework for classifying medieval arrowheads and can give some indication of dates and f motion, our understanding of these artefacts, produced in himdreds of thousands, relies on too few stratified and provenanced finds. Within the typologies, the value of certain types in defeating armour is far from universally accepted. Archaeometallurgical research provides an alternative insight into the quality and likely effectiveness of these weapons. Examination of arrowheads from one certain (Towton, 1461) and one putative (Holm Hill, 1471) Wars of the Roses battlefield assemblage provided a unique and unexpected insight into the manifacture of these projectiles. It shows a demand for quantity over quality, which led to new construction methods involving brazing, and suggests that the majority of troops were only poorly protected by armour. In addition the study permitted the re-evaluation of the relationship between the Holm Hill site and the battle of Tewkesbury.

An assemblage of post-medieval iron bars was found with the Princes Channel wreck, salvaged from the Thames Estuary in 2003. They were recorded and studied, with a focus on metallography and slag inclusion analysis. The investigation provided an opportimity to explore the use of midtivariate statistical techniques to analyse slag inclusion data. Cluster analysis supplemented by principal components analysis revealed two groups of iron, probably originating from different smelting systems, which were compared to those observed macroscopically and through metallography. The analyses reveal that the bars were formed from raw blooms, and all were made with iron produced by the direct process. The outward imiformity of the bars is at odds with the variable quality of iron displayed within and between bars.

Experimental ironmaking in the 1720s: Thomas Tomkyns and his contemporaries

Thomas Tomkyns had an effective (though inefficient) process for making bar iron from pig iron in a reverberatory air furnace, which he patented in the name of Roger Woodhouse in January 1724. Its implementation was delayed by Tomkyns being severely in debt, also by the rivalry of William Wood who had an ineffective process for making iron from its ore, but enjoyed political patronage from Sir Robert Walpole. The process was tried at Nine Elms in Surrey in 1726, then used successively at Oakamoor (Staffs) in 1728, at a copper works near Maidenhead (probably Temple Mills atBisham, Berks), and finally atLydney cl733. However, the low price of iron (due to Russian imports) in the mid-1730s rendered the process improfitable. In this context, William Fallowfield, whose process used peat, stood little chance of commercial success.