Research into the gold surface treatment identified in the Staffordshire Hoard

Secrets of the Anglo-Saxon Goldsmiths

The Hoard was discovered in 2009, in the county of Staffordshire. It is the largest ever single find of Anglo-Saxon gold (c. 5kg) and silver (c. 1kg) metalwork, the majority of objects relating to war equipment. The material ranges in date from the mid/late 6th century to the mid/late 7th century, but the bulk of objects were made and in circulation in the first half of the 7th century. By virtue of the gold, silver and garnet inlays used, the metalwork represents the possessions of the warrior and princely ruling classes of early England. Each individual object would ordinarily represent a rare find, and finding so many together has forced a re-evaluation of the true nature of Anglo-Saxon material culture of the period.

This research is just one part of a much larger analysis project the English Heritage-funded research and analysis project “Contextualising Metal-Detected Discoveries: the Staffordshire Anglo-Saxon Hoard”. The aim was to characterise the metalwork in order to place this large hoard in the context of the Anglo-Saxon period and to determine whether the analysis could answer questions related to chronology, gold working techniques and workshops. The study included complex pieces made from a number of different components, as well as some sets of objects to investigate workshop practice. The further aim was to investigate whether the apparent surface treatment of the gold was as widespread as suggested by the initial pilot group. The fragmentary nature of the Hoard, and the damage done to the objects before they were buried provided an unrivalled opportunity to study the working practices of the goldsmith not usually possible on intact gold objects. 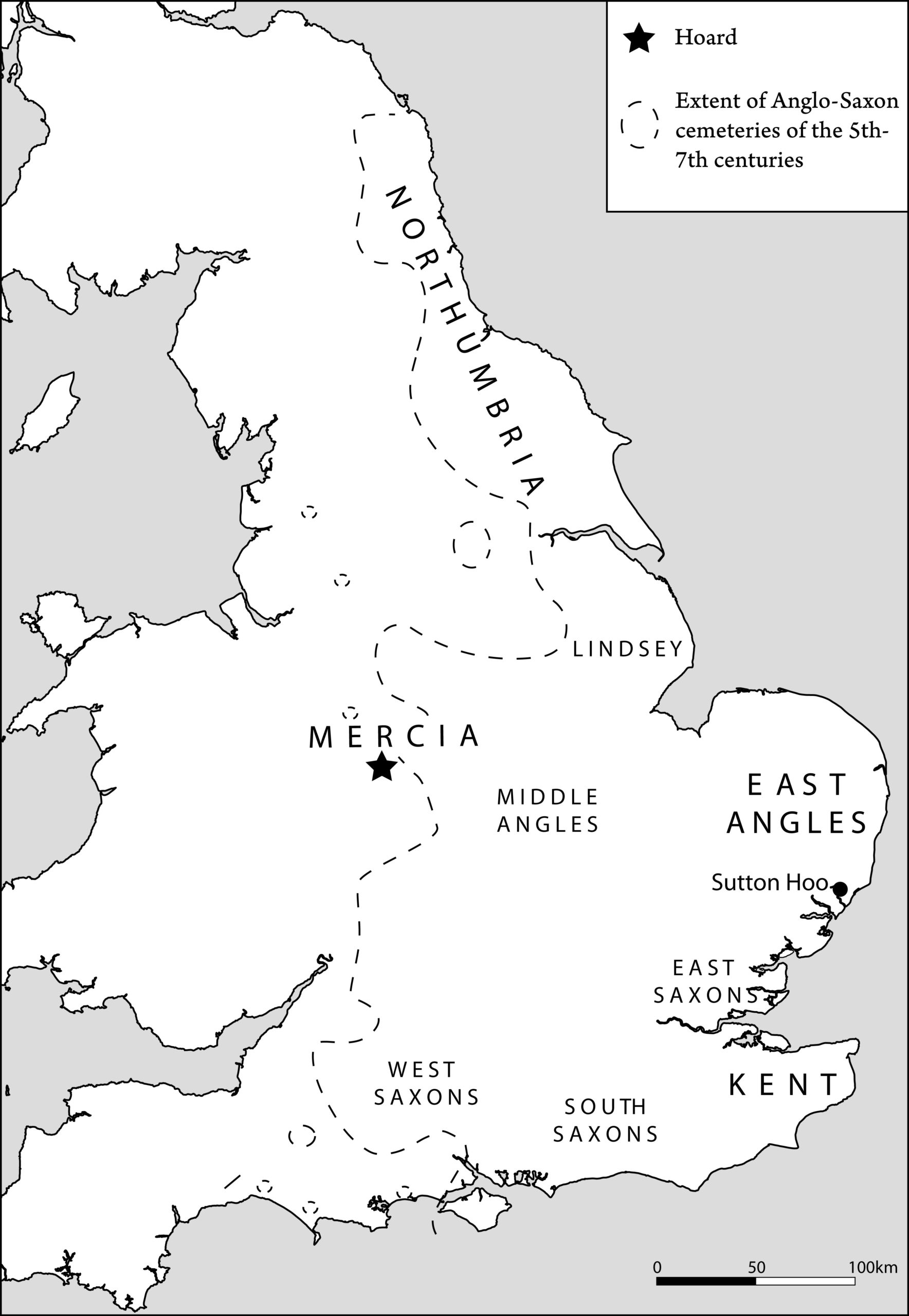 Figure 1: Showing the location of the Staffordshire Hoard in the context of the Anglo-Saxon kingdoms, and the Sutton Hoo ship-burial.

Pure gold is very resistant to corrosion but most historical gold objects are not pure gold and are made from an alloy of gold with silver and copper. For archaeological materials, the base metals present (i.e. copper and silver) can be affected by the burial environment, with copper often lost from the surface of gold alloys because of corrosion. Silver on the other hand is more corrosion resistant, but researchers agree that very small proportions can be lost from the surface of objects due to natural corrosion processes. All such losses leave the surface of objects richer in gold than the core.

This so-called surface enrichment can be caused accidentally during use and burial, by natural corrosion mechanisms or during manufacture (either accidentally or deliberately). There is documentary evidence for several ancient methods for removing copper and silver from gold, and analysis of gold alloy objects from other periods and cultures have shown that deliberate surface enrichment was sometimes being undertaken.

At the British Museum a pilot combination of X-ray fluorescence analysis (XRF) and scanning electron microscopy with energy dispersive X-ray analysis (SEM-EDX) was carried out on a small number of objects from the Staffordshire Hoard, to provide an indication of the effect of the burial environment and determine which technique could be used for future analysis. But this lead to a surprising discovery.

The graphs in Figure 2 (to the right) show SEM-EDX data for K79 and K1221). When the silver content is plotted against the copper content, the surface and sub-surface analyses form two distinct groups indicating a decrease in copper at the surface (K79), which is typical for corrosion. For the same object, plotting silver against gold indicates that the sub-surface and surface analyses are very similar, which was to be expected. This traditional surface depletion in copper was noted in three of the sixteen objects analysed while two objects showed very little evidence for surface depletion of any kind.

By comparison, the remaining eleven objects revealed extensive loss of silver at the surface, and in six cases this was particularly striking. For example the analysis of K3 revealed that along with the loss of copper at the surface (likely due to corrosion) there was also over 40% loss of silver at the surface compared to the core. This degree of silver depletion is very unlikely to be due to corrosion during burial alone. This was confirmed by the analysis of the metal revealed within deep scrapes on K1221. These scratches were probably made by those dismantling the swords before burial. The scrapes showed the typical surface loss associated with corrosion during burial, i.e. loss of copper and no loss of silver (K1221). However, the undamaged surfaces of the same object revealed a different picture, with significant loss of both silver and copper from the surface.

This suggests that some form of deliberate “depletion gilding” had taken place (e.g. deliberate removal of both silver and copper from the surface of the gold alloy, probably to enhance the colour of the object). This would have been followed by burnishing of the treated surfaces by the maker to create the shiny surfaces seen. 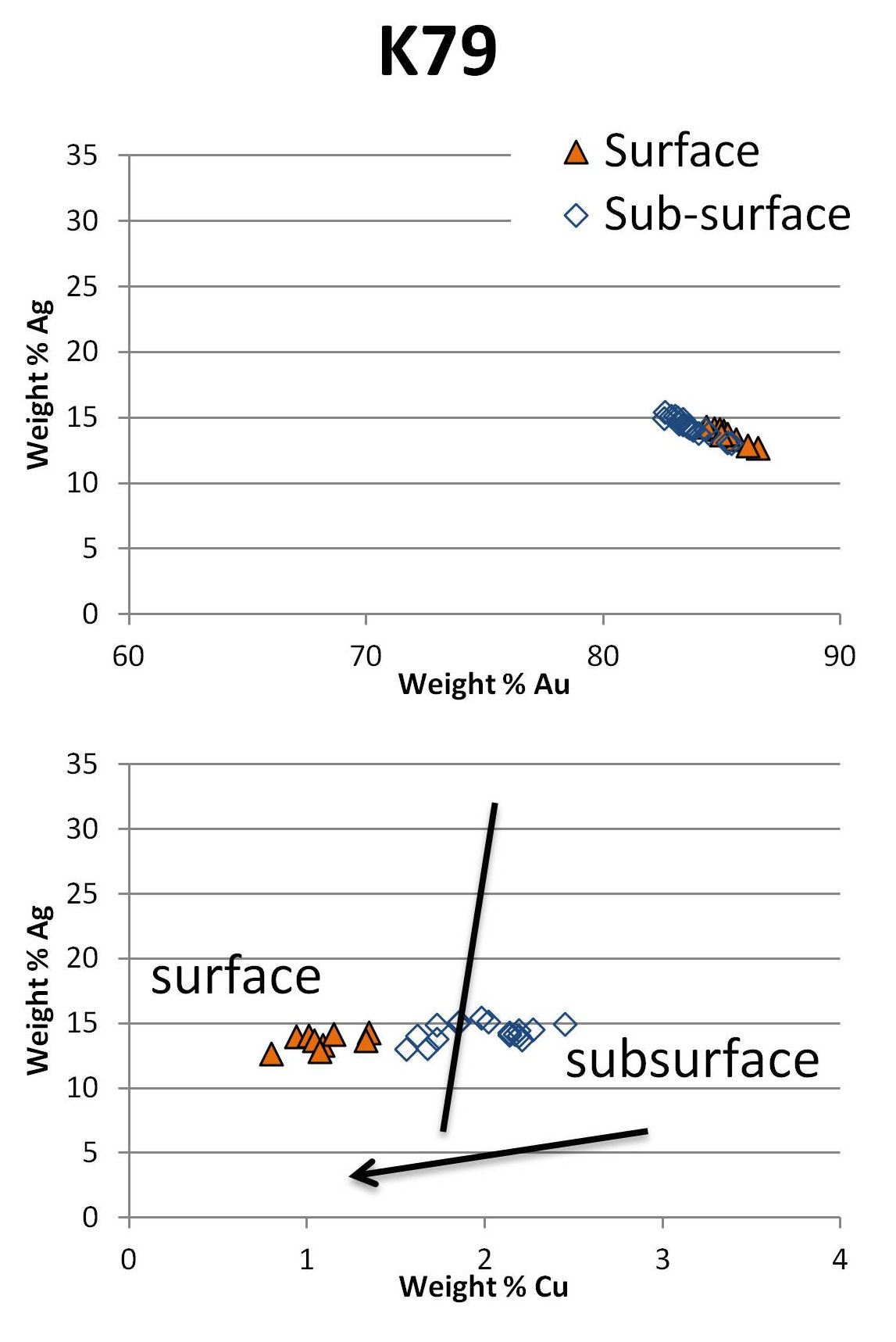 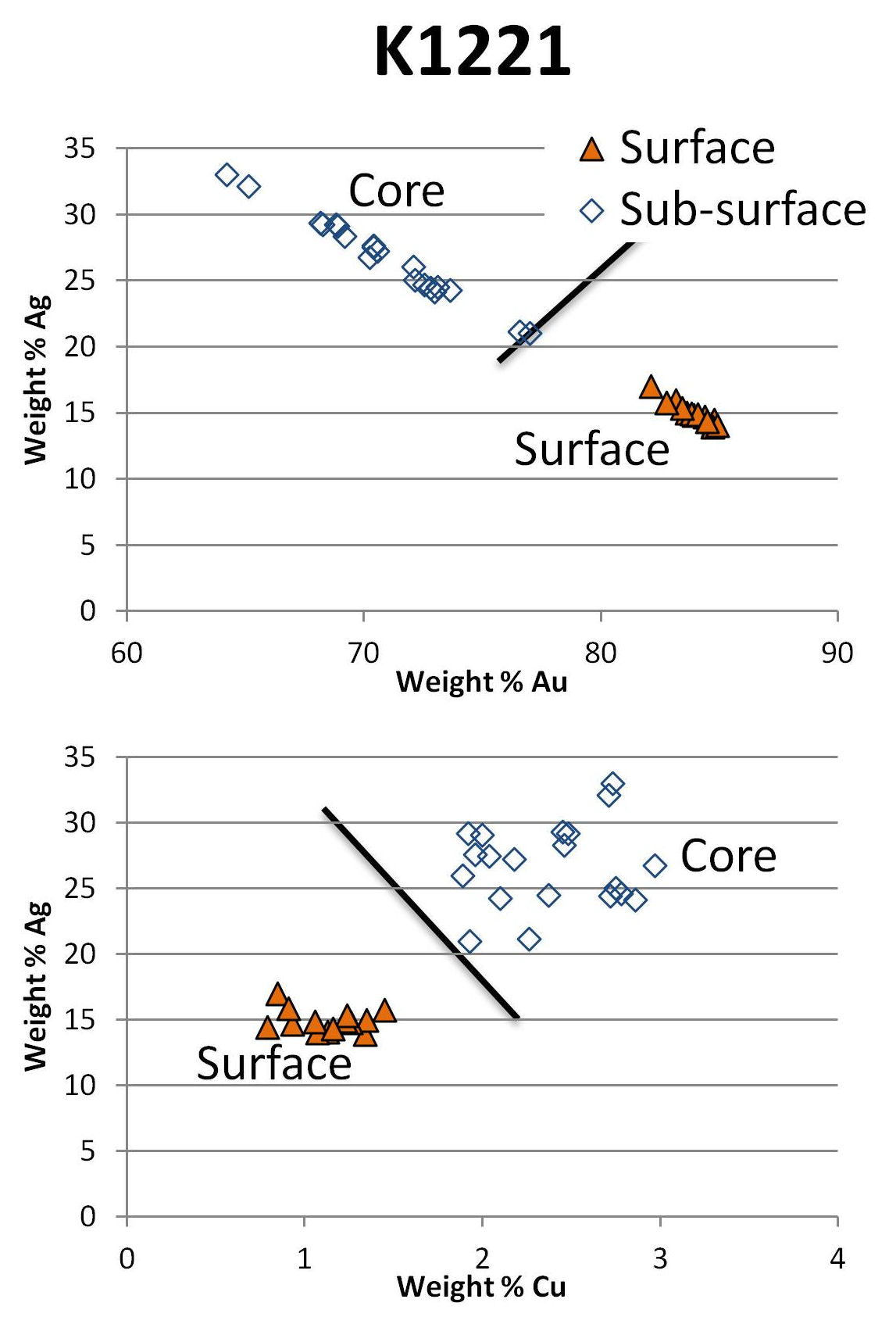 Figure 2. Graphs showing the typical change in composition (K79) expected due to burial compared to those seen in most of the objects which had silver removed from the surface (K1221)

Therefore a much larger study was then carried out on more objects from the Staffordshire Hoard and British Museum collections, than previously planned, to further investigate the surface treatments discovered but also the gold content of the metals. This further analysis was carried out on different components that made up each piece, and this revealed that the sheets used to construct the pieces were often the only component treated (Figure 3). This treatment would have produced a contrast (Figure 4) that emphasised the design. In addition the analysis clearly showed that it was a deliberate choice by the goldsmith, and was only carried out on components that would be seen or in cases where it improved the design. It was not carried out on cloisonné objects, where the gold sheets would be hidden behind garnets. Finally because in many cases the gold used to make each component was similar (if not identical) it suggests that the technique was being carried out in the workshop, rather than importing in pre-treated sheets. 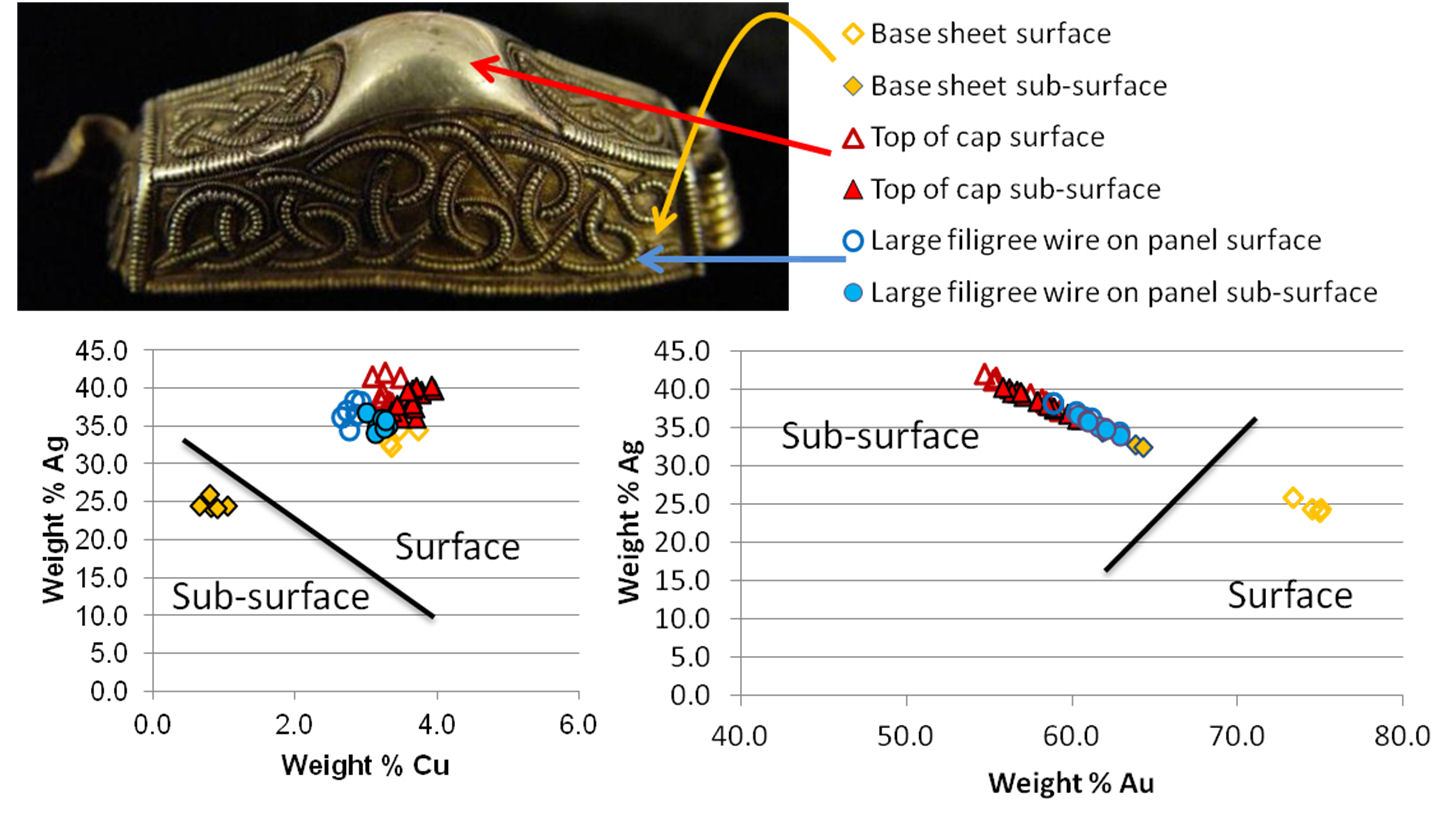 Figure 2. Analysis of K88 showed that the sheets were being enriched whereas the wire and cap were not. 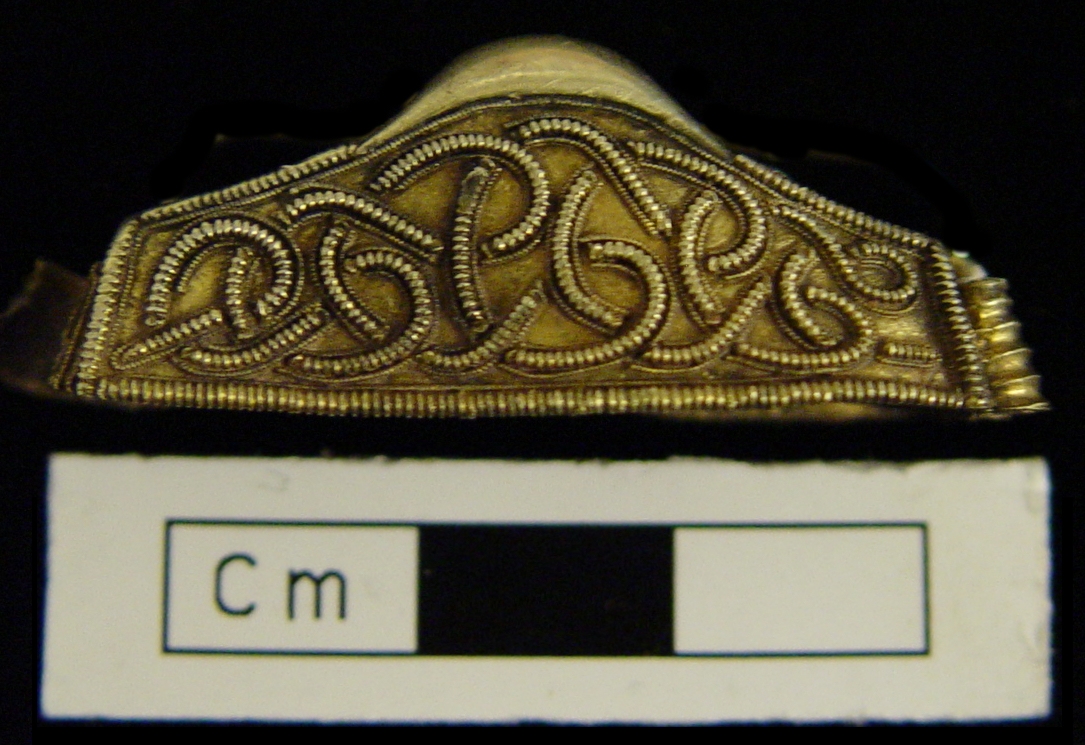 Figure 3. This created a contrast, which emphasised the design, which can be seen here were the sheet behind is a much more golden colour compared to the wires.

This evidence suggests that in the Anglo-Saxon period there was deliberate surface treatment of at least some gold alloys. This has implications not only for the Staffordshire Hoard Project but also for other research projects on Anglo-Saxon gold, and potentially for other gold objects from other periods and our understanding of metalworking technology.

The book on the Staffordshire Hoard has been published , and will include all details about the craft techniques and materials, as well as the research on the objects themselves. In addition a digital archive of data and reports is available for free via the Archaeological Data Service here.