By ellieadmin February 20, 2020 Past Events
No Comments

In this Olympic year the Historical Metallurgy Society invited its members to join it for a one day conference on the real stories behind non-ferrous metals.

Not so much gold, silver,bronze –
more copper, zinc and brass 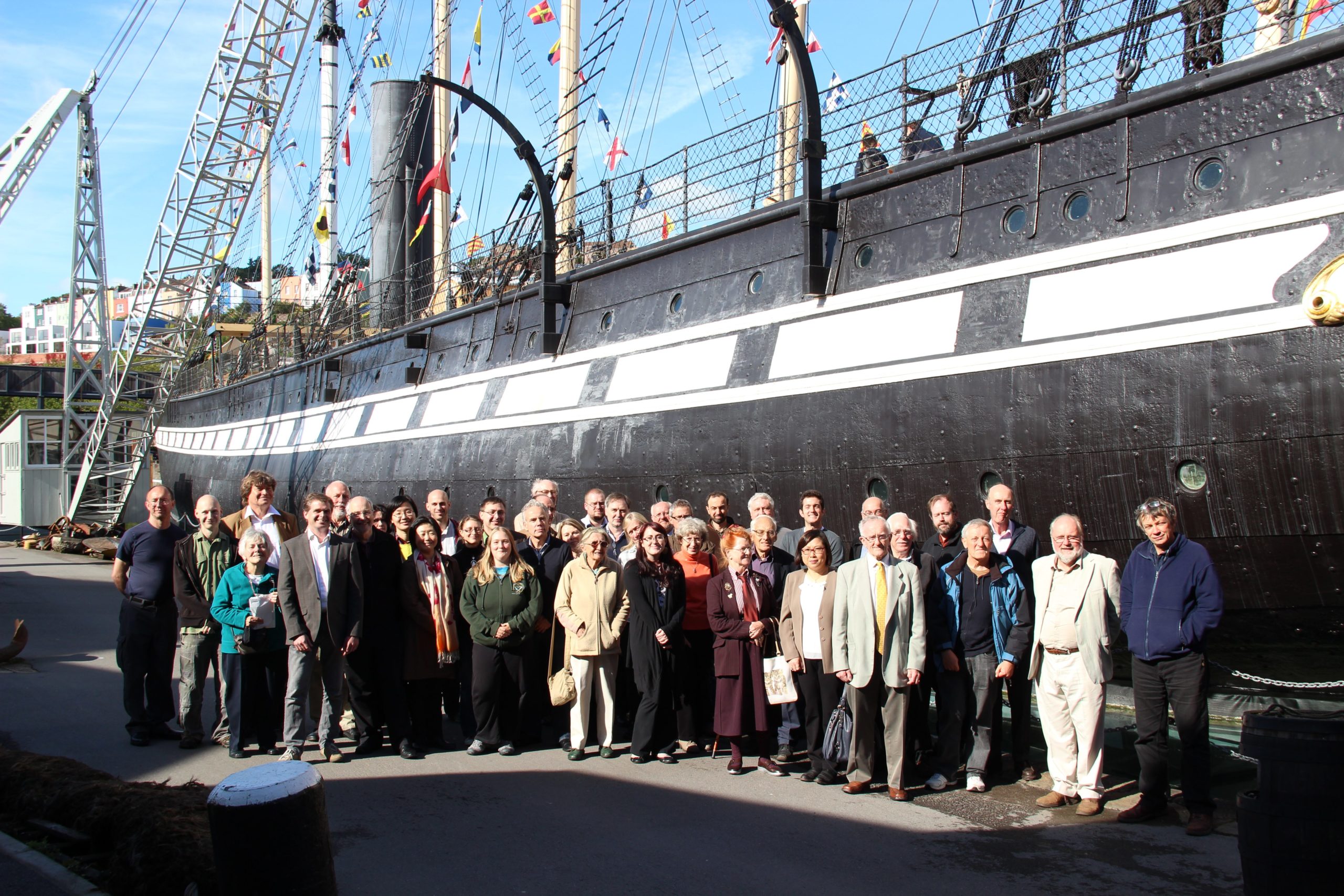 The conference was hosted in the stunning Victorian surrounds of the SS Great Britain, the world’s first great ocean liner. The Bristol area is rich with non-ferrous archaeological sites, and on Sunday 7th October there was an opportunity to explore many different post-medieval metalworking sites with expert guides.

In a break from the Society’s recent iron-centered themes, this year’s annual HMS conference, entitled “Not so much Gold, Silver, Bronze – More Copper, Zinc and Brass”, focused on non-ferrous alloys, with brass taking centre stage.

This meeting was a tremendous success with over forty delegates from across the UK and Europe and clearly demonstrated that there is wide interest in non-ferrous metallurgy among the Society’s membership. The conference was held in Bristol’s city centre in view of the scenic SS Great Britain, which gave the proceedings an appropriately, although slightly anachronistic, historical backdrop. The event was excellently organized by Eleanor Blakelock and Matt Phelps and chaired by Paul Belford.

The conference was held over two days, with the Saturday dedicated to eight related papers presented by researchers and professionals from a broad range of backgrounds, while the Sunday was reserved for tours of the Warmley Brass and Zinc Works and the Saltford Brass Mill.

Saturday’s program included eight talks, roughly divided by theme. The conference included generous tea breaks and an excellent lunch that offered the perfect venues for discussion. After a brief introduction to the proceedings from Paul Belford, the first of two technical papers was presented by Jocelyn Baker from Durham University on quantifying colours using spectrophotometry and ED-XRF. This was combined with a study of historical records in order to understand how British Anglo-Saxons would have perceived the relationship between copper alloy and precious metal colour space. The Society then welcomed our German colleague Gerald Eisenblätter from Leipzig University who gave a talk on the use of X-ray computed tomography and its use in the investigation of the Roman copper coins. This paper, co-authored by Alexandra Franz and Gert Kloess, combined various imaging and archaeometric approaches to offer a versatile non-destructive method to characterize the composition of copper alloys.

After a short but well deserved coffee break the lectures continued on a decidedly more international outlook. Cambridge Archaeological Unit’s Simon Timberlake presented an overview of experimental mining and archaeometallurgical investigations at Sakdrissi in Georgia, in the Mitterberg region of Austria, and Rosia Montana in the Apuseni Mountains of Romania. This broad sweeping overview was followed by Wenli Zhou from UCL who gave a paper on China’s zinc distillation process from the 14th to 20th centuries. This paper outlined the clear technological head start that Asia enjoyed over Europe in regards to zinc production and neatly led to the next series of paper which covered the more traditional brass cementation and later zinc distillation processes in Europe and Britain.

The next four papers had a more local flavour, outlining the rise and fall of the British brass industry. A fascinating paper by one of the premier scholars on the Bristol brass industry, Joan Day, was read by Tony Coverdale of the Saltford Brass Mill Project on the historical and archaeological story of the Avon Valley copper and brass industry between 1700 and 1740. A paper covering the development of the rise of South Wales as the world’s dominant copper smelting area in the 19th century and its impact on shipping technology and the copper industry was given by Keith E. Morgan, curator of the Trose Works Cottage & Industrial Museum. Keith also kindly shared some surprising insight into the family origins of Swansea Valley’s famous actress Catherine Zeta-Jones. This was then followed by a review of recent salvage excavations at William Champion’s pioneering but ultimately failed 18th century venture at the Warmley Brass and Zinc Works by David Etheridge of the Avon Archaeological Unit.

However my personal highlight was the last paper of the day, given by historian Chris Evans of the University of Glamorgan, who broadened the topic substantially by exploring the role of copper and brass objects in the transatlantic slave trade. This excellent exposé was the source of lively discussion and elegantly tied together the various strands of research of the day into the broader global context which illuminated much of the developments we saw on more local scales.

The Sunday programme of field tours proved to be equally captivating. The first visit was of the Warmley Brass and Zinc Works discussed the previous day by David Etheridge. This complex was the first to produce zinc metal through the distillation process to make high zinc brass in Britain starting in the 1740s. The walk through the patchy remains of William Champion’s estate was very interesting although at times puzzling and mystifying. The slag-block summer house, and slag-clad concrete statue of Neptune, and slag-lined grotto complete with industrially warmed waterfall, were particularly inspiring! Following a delicious Sunday carvery lunch at the Riverside Inn, we continued the day’s activities at the Saltford Brass Mill where Tony Coverdale and Joan Day gave a riveting tour. This mill is a prime example of what would have been a complex of mills scattered throughout the region working brass ingots into sheets and then into the various hollow-ware vessels destined for export. The grounds are dominated by several watermills that were used to roll the ingots into sheets and to power large “battery” hammers.

The positive response we have received to this entirely non-ferrous meeting (with only the occasional reference to iron manhole covers) clearly shows that there is much appeal for alloy-specific themes amongst the Society’s members. It has been particularly pleasing to attend this well-organised and cohesively themed conference. This gave the chance for all the delegates to engage in meaningful discussion, crossing both geographic and methodological barriers. Attendance to the conference by all sectors of archaeometallurgy, including academics, enthusiasts, historians, museum curators, metallurgical engineers, and commercial archaeologists, continues to highlight the strength of the Historical Metallurgy Society in bridging customarily segregated fields. I look forward to seeing the Society expand on these strengths and feel confident that our next meeting, the 50th Anniversary Conference and AGM in London will be just as engaging and successful as this one has been.

Written by Loic Boscher for The Crucible 81