The ferrous industries were central to the origins of HMS in 1962-3, and fifty years later we returned to the historical heart of the English iron industry to review progress in research, conservation and interpretation since then. 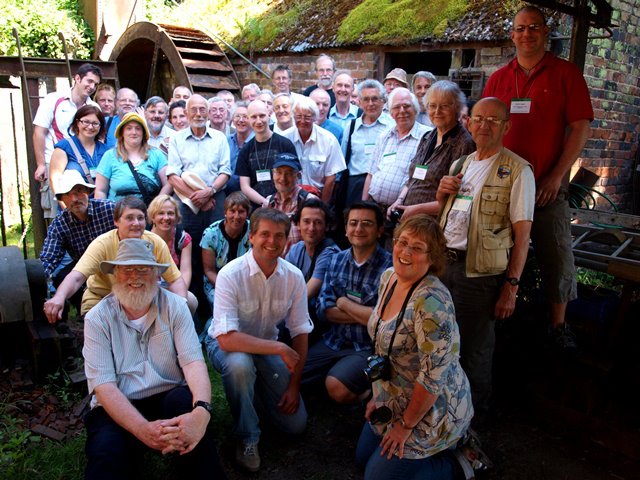 Part of the series of event organised for the 50th Anniversary of the Society. The ferrous industries were central to the origins of HMS in 1962-3, and fifty years later we returned to the historical heart of the English iron industry to review progress in research, conservation and interpretation since then. This residential meeting echoed the focus of early HMS gatherings.

There were site visits and behind the scenes tours to:

Along with a range of lectures on medieval and later ironworking practice; origins and conservation of blast furnaces; new research into forges and puddling technology; hot blast and the cupola, and more.

The accommodation and lectures were provided at Woodbrooke Hall a Quaker Study Centre, with splendid facilities including a boating lake for evening entertainment.

The first of the three HMS 50th anniversary conferences was held over a weekend in Birmingham at the beautifullly landscaped grounds of the Woodbrooke Quaker Study Centre in the historic heart of the British iron industry.

Peter Crew began Friday’s talks with a paper discussing the development of iron production seen through bloom sizes, production estimates, and raw material costs. Kate Biggs’ paper ‘Overlooking the Wye Project’ discussed the importance of a holistic approach to heritage management, dealing with both the built and natural environments. Recent projects dealt with Abbey Furnace, Tintern, and Mushet’s Whitecliffe furnace, Coleford, the latter of which is now being conserved. Ian Standing, who took an active part in Whitecliffe’s preservation, was on hand to answer questions. Highlights from Saturday included Don Wagner’s paper on ‘Cast Iron in China’. He discussed such objects as 2nd century BC cast iron tomb doors and the Cangzhou lion (cast 953AD). The lion, which was largest cast iron object in the world until 1910, is now corroding badly due to mismanaged conservation. David Cranstone discussed the problems researching puddling caused by conflicting contemporary literature.

The fieldtrips were a high point of this conference, made all the better by the fantastic weather. At the Black Country Museum we witnessed chain making, brass casting, and wandered through industrial relics such as steam-hammers, a re-heating furnace and rolling mill. This was followed by a fascinating tour of the water-powered Churchhill Forge, active for over 500 years, complete with an operational waterwheel. Sunday’s tours were to Cinder Mill, a partially excavated water-bloomery site, and to the Stirchley Furnaces, Telford; an extremely impressive site built in the 1820s with a monumental chimney and the remnants of four blast furnaces. A knowledgeable tour of the site was provided by Paul Belford.

Written by Matt Phelps for The Crucible 81