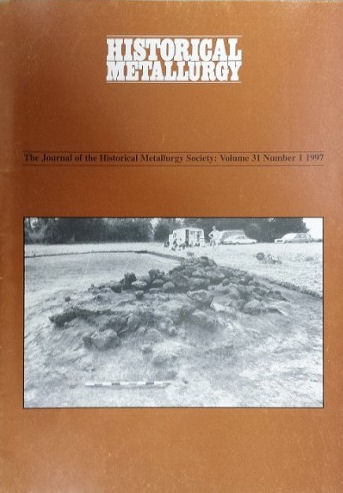 Stone moulds were in common use around the world from  the inception of metallurgy until the recent past, and most were certainly used to cast metal directiy. Some ancient moulds from the eastern Mediterranean are of limestone and moreover, do seem to have been subjected to heat. However, there has been contiauing scepticism amongst metallurgists and metalsmiths that moulds of thermally unstable stone such as these could have received molten copper.

The discovery of a Bronze Age ingot mould from Ras Ibn Hani, Syria, which clearly had been used to cast copper oxhide ingots inspired further experimentation into this subject. The mould was described as being of limestone, and casting rephcations were performed using a special limestone from Gozo, Malta which is used in the construction of ovens. A small oxhide ingot of copper was cast quite successfully, and both mould and operatives survived!

The limestone was shown to be highly fossihferous and of fairly pure calcium carbonate, very similar to that used for some of the ancient moulds examined from the British Museum’s collection and for the Ras Ibn Hani ingot mould, suggesting a long continuity of dehberate choice of this type of limestone through the central and eastern Mediterranean for tasks where heat-resistance was important.

Thus bronze can be cast in a limestone mould. However it is suggested that it was only really feasible to cast large simple shapes ia single moulds, where loss of surface detail and limited gas generation would not be catastrophic.

Mount Gabriel and metal sourcing in the Bronze Age

The past 15 years have seen considerable interest devoted to the study of Bronze Age copper niining in both Britain and Ireland. Field survey and excavation over this period have led to the discovery of many important early mine centres, most notably Ross Island in Ireland, the Great Orme, Parys Mountain and Cwmystwth in Wales and most probably Alderly Edge in England (see Craddock 1994). The discovery of these early copper mines adds significantly to our knowledge of Bronze Age metallurgy and reveals how early miners were able to exploit a range of copper mineral occurrences in different geological settiags. While many early mines were located on rich concentrated deposits of minerahsation, others exploited mineral occurrences which in terms of grade and tonnage would not quahfy as ‘ore’ in modem times. This abilty to adapt to different geological environments and mineral occurrences was an important factor in the successful development of copper metallurgy in these islands.

Fieldwork centred on Holme-on-Spalding Moor, East Yorkshire, has resulted in the discovery of an iron industry that may be the oldest and one of the largest so far found in Britain. Dating from the Middle Iron Age and continuing into the Romano-British period, this iron working is related to a former estuarine creek system and tidal inlet of the river Humber, in which the Hasholme log boat sank. It is possible that control of the iron industry and/or its associated watercourses was a contributory factor to the wealth and prestige of the Arras Culture of East Yorkshire.

A number of ironmasters operated between Bristol and Gloucester from late in the 16th century into the 19th century. The main works were at Mangotsfield, Tortworth, Frome, Framilode and Gloucester. Here are traced the careers of the most important of the entrepreneurs — Arthur Player, Roland Pytt, John Pumell and William Montague.

Connecticut makers of wrought iron used bloomery smelting, fining, and wood-fired puddling through the first half of the 19th century to build the high reputation of Salisbury iron. Data from account books and ledgers coupled with material evidence from forge and furnace sites show the advantages that each technique offered over the others. Transportation costs and the prices of the grades of iron made by each process were the principal factors that determined ironmaker’s choice of method.