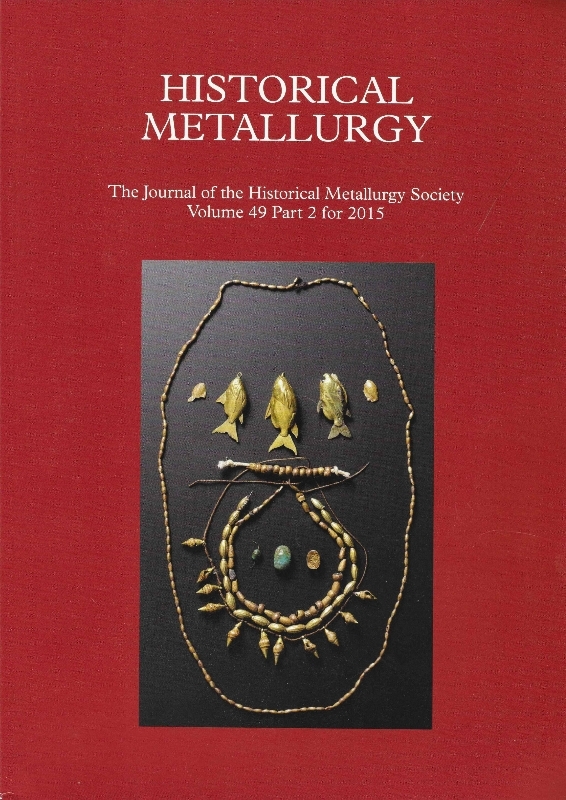 Excavation of an intact burial at Haraga, Egypt (12th Dynasty) revealed the unusual presence of several gold catfish and tilapia pendants and gold bead necklaces, now in the collection of National Museums Scotland (NMS). Analysis of the pendants and gold beads by XRF and PIXE/PIGE has shown that the majority were made from silver-rich electrum with quantities of silver between 20wt% and 40wt%. Only the most skilfully crafted fish pendant was made with a high-purity gold alloy containing less than 7wt% silver. The gold beads, which were made by rolling foils of different thicknesses on a lime plaster core, are highly degraded. FEG-SEM observation of one corroded fragment revealed a porous texture of the surface corresponding to a failed annealing that caused an increase of the corrosion rate. The surface of the beads has a red coloration caused by the formation of gold-silver-sulphur compounds, characteristic of atmospheric corrosion of gold-based alloys.

The paper outlines the results of some of the preliminary investigations carried out on a late Roman hoard of luxurious silverware. They have yielded valuable data on the manufacturing technology and the state of the objects. This work is part of a complex and long-term programme of conservation and restoration of the hoard which will also include a detailed technological examination of each individual object.

‘Wolf rahm’: archaeological evidence for the veracity of an old term.

The medieval tin smelting site at Brownie Cross, Devon, lies just 4km from the tungsten deposit of Hemerdon Ball and smelted alluvial ores commonly contaminated by wolframite. The slag is present as fragments of thin sheets, probably scraped from the surface of the tin in the float, the bases of which bear inclusions of tungsten metal, tin oxides, wolframite and hard head. The low-tungsten slags variously comprise spinels, ilmenite, olivine and Fe-cordierite in glass. The high-tungsten slags are glass with an unusual Fe-Mn-Mg tungstate (tungstate A) and commonly show relict emulsion textures, in which the tungsten-rich component shows extreme enrichment of tin with respect to silica. The ability of the tungsten-rich slags to capture tin demonstrates the problems faced by medieval smelters in Germany, who named the contaminant ‘Wolf rahm’ (wolf’s spit, foam, froth or dross), implying that the slag devoured tin, like a wolf devouring lambs.

Early post-medieval type pieces used for printing have rarely been the topic of archaeometric research due to the scarcity of archaeological evidence. Extensive finds from Wittenberg, Germany, in recent years, however, stimulated far-reaching interdisciplinary research into early book printing history which brought together results from typographical, typometrical, historical and archaeometallurgical examination. As a consequence, three older finds from Mainz and Oberursel are reappraised archaeometallurgically. Chemical analysis shows that type composition is rather homogenous within single finds, but differs between find locations. Two major groups of ternary type metal containing lead, antimony and tin are identified, differing in the content of alloy additives and their ratios. The results suggest, however, that alloy compositions have been chosen carefully in order to provide low-fusing metals with acceptable hardness and good wear resistance. Comparisons with the Wittenberg type pieces indicates probable interaction of craftsmen from different regions.

This paper describes the scientific investigation of the raw materials, iron products, slags and slag inclusions from a bloomery smelting and bloom forging experiment. The smelt used a high alumina sideritic ore, a clay-built shaft furnace and a blowing rate of around 200 litres per minute. The smelting slag produced was viscous and frothy, most similar in composition, microstructure and morphology to slag from medieval bloomeries smelting similar ores. Unusually, the slag contained magnetite rather than the typical wüstite, in the form of dendrites which were often nucleated on euhedral spinel crystals. The distinctive microstructure and composition of the smelting slag allowed inclusions of this slag to be differentiated from others which were formed and modified during smithing from bloom to bar. The silica to alumina and the silica to lime ratios in the bloom and bar slag inclusions were lower than in the smelting slag. A series of materials balance calculations indicates the influence of different proportions of furnace lining, fuel ash and ore on the smelting slags and the inclusions.