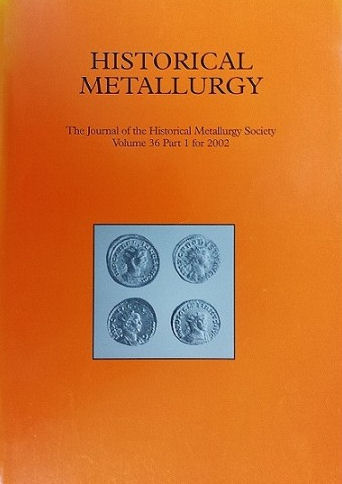 This paper presents an amlysis of a bead from third millennium BC levels of Jerablus Tahtani, near Carchemish in Syria. The bead was found to consist of almost pure metallic antimony, with small amounts of lead, arsenic, copper and tin. Antimony objects are very rare in the archaeological record and very few analyses have been carried out. Until this paper, no description of the microstructure of such beads has been published. The paper goes on to discuss the probable sources of the antimony metal and the possible provenance of the bead itself.

The first results of on-going metallographic and analytical investigations show specialized skill ofblacksmithing technology in a continentalpre-Roman settlement. The proven use of scrap metal also reveals a probable temporary lack of steel, and illuminates the economic situation prevailing in the crumbling late La Tene Celtic world in continental Europe.

The discovery in 1998 of a late third century AD coin hoard at Rogiet (Monmouthshire) provided the opportimity for a technical study of the plating of the later Roman silver coinage which carried a very thin silver wash over a copper core. Optical metallography and scanning electron microscopy were carried out on taper sections on eight coins. Their plating was rarely thicker than 1-2μm and often too thin to be visible in cross section. There was no eutectic layer or diffusion zone at the interface between plating and core. The plating penetrated into cracks and crevices of the copper. It was not connected to the small amounts of silver phase within the copper core. From a comparison of these results with replication specimens it was concluded that the plating was applied in the form of a silvering paste, possibly based on silver chloride. Hot-dipping into molten silver chloride proved to be impractical in the replication experiments and was ruled out. No mercury was detected on any of the coins with EDX analysis in the electron microscope.

Iron resources and production for the Roman frontier in Pannonia

During Roman times Siscia was an important settlement, controlling a key route between Pannonia andDalmatia, across the river Sava. To the south of Siscia, on Mount Trgovi, Mount Zrin and Mount Majdan, limonite deposits were exploited on a very large scale resulting in millions of tons of slag. Finds of large numbers of iron bars from Hrvatska Dubica, Siscia and the Japra valley indicate extensive iron smithing in the area. Thirty-eight of these bars survive and their size and weight suggest a degree of standardization of the products. It is estimated that between 150 to 200 million of these bars would have been produced in this region during the Roman period.

Rescue excavation by Trent & Peak Archaeological Unit on behalf of RJB Mining (UK) Ltd has recorded the remains of part of an extensive medieval iron smelting site at Stanley Grange, Derbyshire (SK 427406). Eight furnaces oflate-13th to early-14th century date were excavated; it is suggested that the majonty of the furnaces may have functioned using induced draught assisted by orientation to the prevailing winds. This paper reviews the results of the excavation and initial scientific analysis of the slags, and offers a preliminary interpretation of the excavated furnaces. It is presented or publication as a contribution to the debate about furnace types and function and with the hope of provoking discussion on the interpretation of the excavated evidence.

Dud Dudley was the illegitimate son of Lord Dudley and managed certain of his ironworks in the early 1620s. He attempted to smelt iron with mineral coal, but this proved to be a failure, commercially at least. After a series of such failures, his father expelled him fivm his fiimace and coalworks in winter 1630-1. Twenty years later while a fugitive, he attempted to smelt lead (not iron) in a ‘belhouse’ near Bristol, and advised others who were attempting to smelt iron with mineral coal. In 1665, he published an account of his efforts entitled Metallum Martis. This was followed by his erection of a horsemill-powered blast fiimace at Dudley, using a mixture of charcoal and coke. This furnace subsequently passed through several hands and probably closed by 1681. In the intervening years, it was associated with several forges in the nearby Stour valley and an experiment in making tinplate. Sir Clement Clerke, one of the parimers in these enterprises, and later a significant metallurgical innovator, may have been trained by Dud Dudley. If so. Dud Dudley was the progenitor of later coal-based metallurgy, not merely its forerunner.