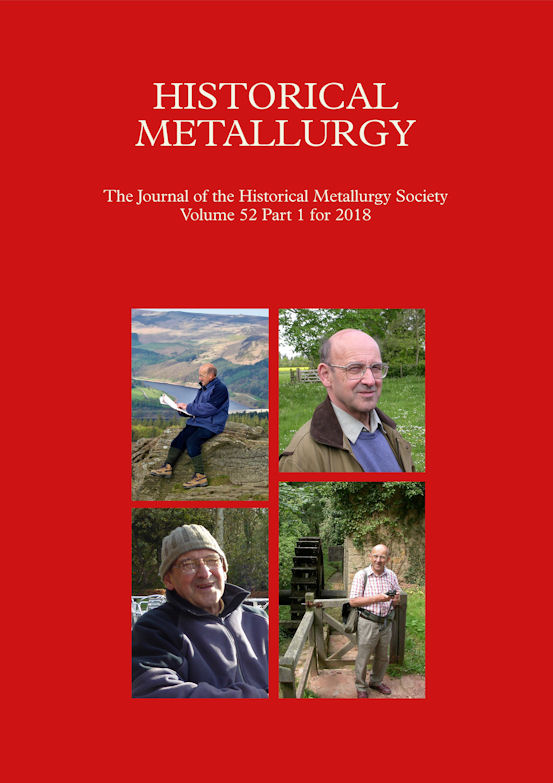 David Crossley had a long and active life, during which he developed his interests in the history and archaeology of industry, the sites where this was carried out and their place in the landscape. Almost all of his working life was spent at Sheffield University, first in the Economic History Department, then in Continuing Education and finally attached to the Archaeology Department. Outside the university he became involved in research into the past industries of Sheffield and the surrounding areas and in the preservation of their material remains.

The contributions below from friends and colleagues amplify the activities and achievements outlined above, and provide a human context for years of dedicated service to a wide range of local, national and international bodies. David had a quiet way of carrying out small tasks that needed to be done, and of sitting through interminable committee meetings; when he did intervene it was often to suggest a solution to a previously intractable problem. He was never one for the limelight, but his many contributions will be remembered by those who knew him. He was respected, revered and loved in varying proportions by his students, colleagues and friends. He gave so much to so many, and it is only now he has gone that we all realise what a gaping void is left behind.

Ore processing is a fundamental step in copper metal production. Despite our burgeoning knowledge of Bronze Age copper mining in the British Isles, unambiguous evidence for this activity during the 2nd millennium BC remains scarce here. In contrast, recent excavations on the continent have uncovered well-preserved, securely-dated evidence for ore processing, particularly the use of gravity separation in water, during the Bronze Age at sites such as Troiboden in the Mitterberg, Austria. This paper considers the implications of this evidence for our understanding of Bronze Age ore processing within British contexts, particularly on the Great Orme headland. At the site of Ffynnon Rhufeinig, located close to a water source near extensive prehistoric mine workings, beneficiated mining waste has been excavated and radiocarbon dated to the Early Bronze Age. We argue that, to avoid destruction, such sites deserve better recognition and conservation as part of complex, multi-phase prehistoric mining landscapes.

Discovery of a set of copper tuyere imprints on the site of Castel-Minier, end 13th to mid-15th century AD (Ariège, France)

From the 13th to the 16th century, iron was produced at the site of Castel-Minier. The excavations since 2003 have found structures and materials that allow us to understand how past metallurgists improved a forge of rather classic design to a real iron production site, relying on a system of inter-valley exchange. This paper relates especially to the discovery of 28 slag pieces. They carry imprints of tuyères that were embedded in ventilation holes into which bellow pipes were inserted. Traditional and 3-D plots were used to estimate their shapes and diameters.

Early post-medieval type pieces used for printing have rarely been the topic of archaeometric research due to the scarcity of archaeological evidence. Extensive finds from Wittenberg, Germany, in recent years, however, stimulated far-reaching interdisciplinary research into early book printing history which brought together results from typographical, typometrical, historical and archaeometallurgical examination. As a consequence, three older finds from Mainz and Oberursel are reappraised archaeometallurgically. Chemical analysis shows that type composition is rather homogenous within single finds, but differs between find locations. Two major groups of ternary type metal containing lead, antimony and tin are identified, differing in the content of alloy additives and their ratios. The results suggest, however, that alloy compositions have been chosen carefully in order to provide low-fusing metals with acceptable hardness and good wear resistance. Comparisons with the Wittenberg type pieces indicates probable interaction of craftsmen from different regions.

This paper focusses attention on what is currently believed to be the earliest published chemical analysis of archaeological bronze artefacts, attributable to Johann Christian Wiegleb in 1777. Not only is this publication 13 years earlier than the previously-identified ‘earliest’ publication, it is extremely early in the history of gravimetric analysis (wet chemistry, or ‘analysis by the humid method’) and is therefore significant in the history of analytical chemistry. As well as pushing the history of analytical chemistry applied to archaeological materials back to the beginning of quantitative analytical chemistry itself, the opportunity is taken to update the list of such publications between 1790 to 1869 (Pollard 2015a) from 118 to 305, and the number from which data have been digitized from 30 to 49, thereby reporting 2825 analyses from this period. Both the list of publications and the digitized data are available at http://flame.arch.ox.ac.uk/public-resources/.