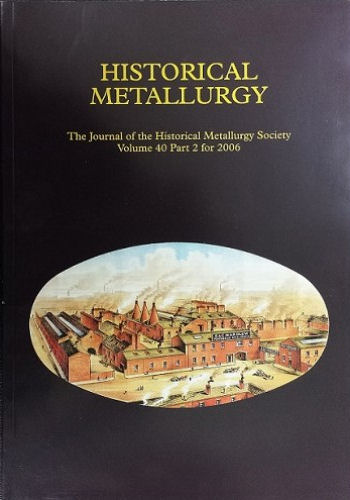 The collections of the Department of Asia, British Museum contain a number of early Chinese objects made of iron or steel. A selection of these, including crossbow bolts, stirrups, edge tools and miscellaneous objects, have been analysed metallographically. The results illustrate various ferrous metallurgical technologies in use between the late 1st millennium BC and the mid 2nd millennium AD. A number of the objects are conventional wrought irons made by the bloomery process or the fining of blast furnace iron; some of these had been carburised to produce steel with a wide range of carbon contents. Other objects had been produced as cast iron, and then subjected to solid-state decarburisation to produce low-carbon iron or steel. Piled, forge-welded structures were common. Composite crossbow bolts had been made by the casting-on of bronze heads onto iron shafts.

David A Scott and Qinglin Ma

A number of cast- and wrought-iron artefacts from Gansu Province, China were examined by metallography to determine the nature of the ferrous materials. The iron objects date from the Eastern Zhou Dynasty (770-221BC) and Western Han Dynasty (221BC-AD8). A large cast-iron bell from the later period of Dajing Mingchang (ADI190) was also studied. A variety of different ferrous technologies was found in the artefacts examined, including: wrought iron—probably derived from bloomery manufacture; steel made by decarburisation or fining of a cast iron; grey cast iron; mottled cast iron; and white cast iron. Electron probe microanalysis was used to obtain elemental composition for some of the artefacts, which in the case of the wrought iron showed extensive banding due to arsenic, nickel or copper enrichment. In some corroded material, pseudomorphic retention of microstructure within iron oxyhydroxides allowed the morphology of the original microstructure to be inferred.

A typology of lead bale smelting slags for descriptive purposes and for recognition in the field is proposed. Extensive SEM/EDX studies of bale slags from Yorkshire, and from Cumbria and Derbyshire, are used to illustrate the typology. The melting points of 23 slags have been determined and experiments with synthetic slags conducted. This has led to an understanding of some of the mechanisms involved in slag formation, and of the temperatures which were developed in typical bales. This in turn has led to an explanation of different types of bale which have been encountered by this author and others.

In the Walloon forge there were two hearths, the finery, for decarburizing cast iron from the blast furnace, and the chafery for re-heating iron during forging into bars. The use of Walloon forges began in the 15th century and by 1600 they were recorded all over Wallonia (the modern francophone southern Belgium and Luxembourg), where they continued in use until the 19th century. However, south and south east of Liege there was a local contrast: in the basins of Franchimont and Durbuy 19th-century Walloon forges were less common, most ironworks combining the finery and chafery operations in a single-hearth ‘fourneau et marteau’. Hansotte explained the local use of these single-hearth (‘Comtois’) forges by replacement by French decree (1807-1811) in order to save fuel. It is shown here that single-hearth working similar to the German ‘Hutte und Hammer’ had long been common in Franchimont and Durbuy. This is emphasised by the difficulty that the Liege entrepreneurs who set up forges in Sweden in the 1620s had encountered in recruiting specialists in multi-hearth working from their locality.

For their best quality steel, Sheffield cementation steelmakers preferred iron from a small number of finery forges in Sweden and were prepared to pay a premium price for it. This study aimed to determine whether there was a scientific explanation for the steelmakers’ preference. The abundance and composition of slag inclusions from 10 samples of premium and common grades of Swedish wrought iron and 10 samples of blister steel made from both grades of iron were compared. The samples were analysed using optical and electron microscopy, SEM-EDS, quantitative metallography and, where possible, bulk chemical analysis. Analysis found that premium brands of wrought iron had a lower volume of slag inclusions and a higher proportion ofwustite within the inclusions. These characteristics meant that the premium brands of wrought iron would give a ‘cleaner’ blister steel. The results suggest that Sheffield cementation steelmakers had a valid reason for paying more for premium brands.