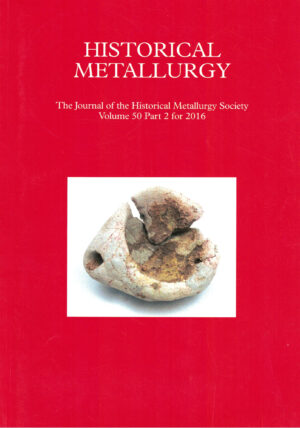 Two small iron smelting furnaces were excavated close to an enclosed Iron Age farmstead, which pottery and radiocarbon dates indicate was occupied during the Early–Middle Iron Age (c5th–2nd centuries BC). The site lies on a belt of iron-rich sedimentary rocks (Jurassic ironstones), and there is plentiful evidence of pre-Industrial era ironworking nearby. Although the remains found at the site appear to be notably early, analysis of the slag has revealed the furnaces were operated in a very efficient way, with a relatively high proportion of iron extracted during smelting. The paucity of smithing residues suggests this process occurred elsewhere.

Excavation of an Iron Age settlement at Westwood in the English Midlands recovered a ceramic crucible of a hitherto unknown form, with a hollow pouring spout. XRF analysis of the crucible detected copper, tin and silver. A find of a solitary crucible in a roundhouse is typical of the period but the form of this example is extraordinary and emphasises the diversity in Iron Age metalworking practices.

Metallographic examination of early medieval knives from the UK

A review in 2007 of archaeometallurgical studies carried out in the early 1980s and 1990s of early medieval (cAD 410-1100) iron knives revealed several patterns, with clear differences in knife manufacturing techniques present in rural cemeteries and later urban settlements. The main aim of the research presented here is to investigate these patterns and to gain an overall understanding of the early medieval iron industry. This study has increased the number of knives analysed from both settlements and cemeteries in this period, filling the gaps. The analysis revealed a clear change through time, with a standardisation in manufacturing techniques in the 7th century.

The refining process, part 1: a review of its origins and development

Refining was adopted early in 1791 as an initial step for the conversion of coke-smelted cast iron into wrought iron, following the failure of Cort’s puddling process to produce good iron directly from grey coke pig. Refining entailed remelting the grey iron under strongly oxidising conditions to produce a white cast iron, known as finers metal, as feedstock for puddling. This paper presents a critical review of the history of this process in bulk ironmaking in Britain, its context amongst 18th-century conversion techniques, the circumstances of its adoption and its purpose, and its development in the light of new archaeometallurgical analyses from excavation of the 1830s-1870s refinery building of the Ynysfach Ironworks, Merthyr Tydfil. Dephosphorisation may have been a major function of refining and it is argued that preventing the reversion of phosphorus from slag to iron was the major reason for the necessity for multi-stage conversion techniques in the 18th and early 19th centuries.

The production of iron by the puddling process continued after Bessemer invented his process for making mild steel, reaching its zenith in the 1870s, then declined rapidly as mild steel was substituted for iron for rails and then shipbuilding. Data on furnace numbers in the Mineral Statistics are used to estimate output of puddled iron and of mild steel from four processes. The total output of all iron and steel processes rose from 5.44M tons in 1875 to 6.0M tons in 1899, but with significantly lower output in the intervening period. Acid Bessemer steel output was at its highest in 1889. Soon after, Open Hearth steel overtook Bessemer steel in importance. Between 1877 and 1899, the roles of puddled iron and mild steel were reversed, with the former falling from 80% of the total to only 20%.