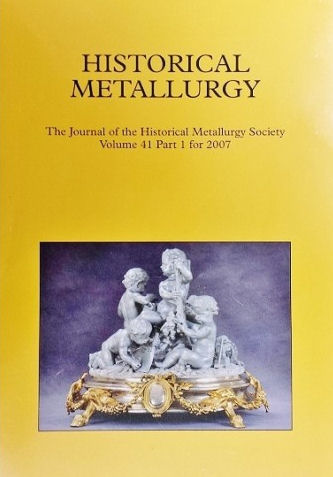 Iron smelting is attested from at least the first part of the 1st millennium BC in both West and East Africa. In both regions the earliest fiirnaces seem to have been the slag-pit type. In this study the slags and furnace remains from such a furnace have been studied. The clays used for thefiirnace structures and for the tuyeres were not especially refractory. Fayalite andhercynite with some wiistite were the main phases present in the slags, with compositions suggesting either the deliberate addition of clay as a flux or a significant clay contribution from the refi-actories. Such slags are known from contemporary and more recent African smelting practice. The significant differences in the slag mineralogy were found to be due to quite minor differences in composition rather than real variations in the processes carried on at the various sites studied.

Large quantities ofironworking waste were recoveredfrom a Romano- British settlement at Westhawk Farm (NCR TR998397), near Ashford, in the Weald. The waste was concentrated around the archaeological remains of two workshops, one pre-dating the other. Both smelting and smithing took place in the workshops, and several furnaces, a possible hearth and a working floor rich in hammerscale survived. The raw materials used in the production of iron at the site have been identified and the formation processes for different types of slag have been investigated through analysis of the waste. The scale of the iron industry at Westhawk has been estimated and is discussed in the context of Wealden iron production in the Roman period.

Investigation of a broken pile-shoe from a Roman bridge

A Roman pile-shoe made from four iron bars had breaks in three bars. One break was a recent impact fracture. A sample containing one of the fracture surfaces was broken into large fragments with a hammer. These were investigated fractographically, metallographically, and by surface and bulk chemical analyses. The fractures were brittle and primarily intergranular. The metal was a coarse-grained phosphoric wrought iron (0.52wt% P) with very low silicon, manganese and sulphur contents, and extremely low carbon content (0.0033wt% C). This extremely low carbon content and coarse grain size indicate decarburisation during smithing. Furthermore, the combination of extremely low carbon and high phosphorus contents is concluded to be the most probable reason for the impact brittleness. This could have been facilitated by a notch effect due to surface corrosion. The significance of the embrittlement and surface corrosion is considered with respect to conservation of archaeological iron objects, including similar pile-shoes.

A review of metallographic analyses of early medieval knives

Early medieval knives provide a wealth of technological data, including information about the quality of iron alloys and smithing techniques (such as manufacturing techniques and heat treatments), and information on cultural aspects such as the treatment of knives found in cemeteries and whether they differ from settlement knives. This paper synthesises the metallo graphic data obtained from the analysis of iron knives recovered from both settlement and cemetery sites of early medieval date, cAD 400-900, with the aim of reviewing the technology used in the manufacture of these knives. Data from 79 knives has shown some clear differences in the manufacture of knives found in cemeteries compared with those found at settlement sites. Most of all, the data demonstrates the paucity of archaeometallurgical investigations of this vital commodity, and the importance of reviewing and re-assessing past studies.

When aluminium was equal to gold: Can a 'chemical' aluminium be distinguished from an 'electrolytic' one?

From 1854 onward, Sainte-Claire Deville developed an industrial chemical process for aluminium production, based on aluminium chloride reduction by sodium. The new metal caused a sensation and competed with precious metals. The cost of production remained high for the first 30 years, making aluminium rare. France was then almost the only producer. In 1890 the electrolytic process replaced the chemical process, leading to low-cost mass production. Aluminium therefore has two main periods, the ‘chemical age’ and the ‘electrolytic age’. Dating an aluminium object based on its typology may be difficult. A total of 71 well-dated medals, jewellery, and other items fivm the period 1855-1916 were analysed by PIXE. This paper proposes criteria based on elemental composition. Eight chemical elements, manganese, iron, lead, and to a lesser extent Cr, Zn, Zr, Ag and Sn discriminate, as levels are generally higher in the aluminium produced by the chemical process. Early analyses show that different grades of aluminium may have coexisted around the transition period between the processes.

Recent archaeological recording at William Champion’s zinc and brass manufactory at Warmley (NGR ST66927283) has allowed the investigation of materials related to the distillation of zinc. William Champion obtained a patent for the production of zinc by a distillation process in 1738 and was producing zinc on an industrial scale from the 1740s. The Champion process enabled the production of zinc-rich yellow brasses which were widely used by the Birmingham ‘toy’ industry. The materials examined include a fragment of a refractory vessel and a residue from zinc distillation. The results highlight the limitations of many patents of this period but provide some indications of how the distinctive process residues generated by zinc distillation can be recognised.