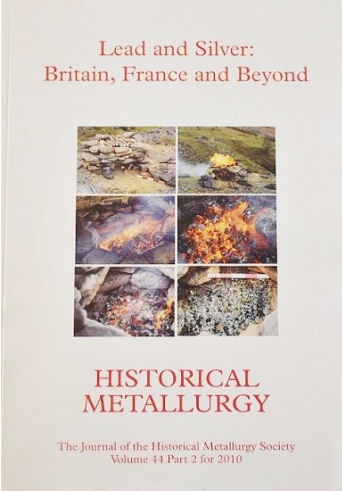 Lead and silver: Britain, France and beyond

This volume brings together a range of papers on the history and archaeology of lead and associated silverbearing ores, the processes by which they were smelted and refined, and the landscapes they inhabited. It has its origins in the papers presented to the Historical Metallurgy Society’s annual conference in 2005, held at Middleham in North Yorkshire. They have been complemented by more recent work to reflect the range of research carried out over the last decade. It is particularly pleasiag to be able include two papers presented at the Society’s Research in Progress conference, held at the University of Bradford in November 2009 to celebrate the archaeometallurgical work carried out there under Dr Gerry McDonnell. They introduce us to the work on the archaeometallurgy of lead, copper and silver being carried out in France, much of it under the auspices of the Centre National de la Recherche Scientifique (CNRS).

Five lead smelting sites have been located in Nidderdale, Yorkshire and residues from them examined. In addition, several other possible sites have been identified from place names. Nidderdale is unusual in that early mining was controlled by monasteries and the records of one. Fountains Abbey, contain considerable information on the medieval lead industry. The sites are located near woodland and on routes which are determined by the positions of river crossings and monastic granges which would have served as staging posts or administrative centres. There are references in the Fountains records of the use ofafrrnacefor smelting lead and it is possible that this took place at a smelting site at Dacre Banks. The relative paucity of smelting residues at the Nidderdale sites has been attributed to the mineralogical composition of the ores which led to minimal incorporation of silica into the slags, the instability of roasted calcite slags with regard to weathering and the fertility of the soil which would have promoted rapid regeneration. Many of the place name sites are on private land where access is relatively difficult.

A brief summary is presented of the evidence for medieval and earlier lead smelting in southern Scotland. Antiquarian, place-name and field evidence indicates widespread smelting with concentrations close to the Leadhills-Wanlockhead orefield and in the Manor Valley, Peebleshire. Four smelting sites have produced 10th-11th century AD radiocarbon dates.

Excavations in 2002 at Cwmystwyth, in Central Wales, found an ancient lead smelting site. There are remains of the medieval and the Roman periods. This paper describes in brief the excavation of the medieval lead bole (Timberlake 2002a) but also provides an archaeological reconstruction of this and details of an experimental lead smelt carried out at the site in 2003 (by ST). The analytical sttidy (by LA) is of the medieval metallurgical debris excavated in 2002, mostly slag, but also ore and lead. The aim was to understand the raw material, the metal produced and the smelting process. The ore smelted was predominantly galena but with no detectable silver, showing it was probably exploited to produce lead. The extremely high sulphur content of the slag bidicates that the ore was not roasted before smelting. It is argued that the medieval activity was small-scale, smelting a very rich ore. The furnaces apparently did not require much capital investment, enabling a short-lived and/or exploratory smelting operation.

This paper outlines the history of lead-silver mining, smelting and refining at Combe Martin, in north Devon, during the 16th and 17th centuries, and the background to the discovery of large amounts of smelting residues from that period in the centre of the village. The results of the analyses carried out on those residues are presented along with an interpretation of the processes which produced them.

The Crown silver mines in Devon: capital, labour and landscape in the late medieval period

In the late 13th century the English Crown intivduced direct management of silver mining in Devon and maintained it for over 50 years. At Bere Ferrers in the Tamar Valley the Crown, and later its lessees, used capital-intensive methods and innovative technology. Large numbers of miners, many of them immigrants, were employed but not housed by the Crown. The impact of silver mining and its infrastructure on the landscape is examined, including the establishment of the borough settlement of Bere Alston as a response to the demand for housing and food supply. The documentary and archaeological evidence for this unique sector of the early mining industiy is variable but taken together as part of an integrated study they provide us with a valuable insight into the organisation and methods used at that period.

Initial experiments on silver refining: how did a cupellation furnace work in the 16th century?

Cupellation was for long the only known method to retrieve silver from argentiferous lead. The operation took place in a cupellation fiirnace, a structure made of a wall supporting a sole (the base for the hearth) and topped with a dome. The hearth, where the alloy was placed, was made from clay and ash. There is very little archaeological evidence of this operation. However, since the 16th century, silver refining has been well documented in detailed and illustrated metallurgical treatises, such as Book X in Georgius Agricola’s De re metallica (1556). Conducting experimentations is therefore necessary to understand the technological choices of ancient metallurgists. Eight operations have been carried out over the past two years. They are entirely based on Agricola’s record. The whole process is taken into account in this study: temperature and atmosphere conditions, hearth composition, drawing out of molten litharge and structure of litharge cakes.

From copper to silver: Understanding the saigerprozess through experimental liquation and drying

The liquation and drying process is used to separate low amounts of silver from coppers, which spread in Europe at leastfi’-om the 15th century onwards. Agricola was the first to describe extensively this new process in Book 11 of his De re metallica. A few metallurgical treatises from modern times evoke it as well, yet owing to the lack of archaeological data very little is known about this process and its products. Hence, several experiments reproducing the whole liquation and diying sequence were conducted on the experimental platform at Melle (France). Products and by-products were analysed by several methods (XRF, LA-ICP-MS, LIBS) so as to create a first reference corpus. This paper aims to present these experimental results and to compare them with analyses of copper-lead alloys coming from French archaeological sites, providing a new perspective on this process at the end of the Middle Ages.

Current silver smelting in the Bolivian Andes: a review of the technology employed

Recent ethnographic studies by Proyecto Arqueológico Porco-Potosi of traditional silver smelting in the southern Andes have revealed the continuing use of huayrachinas, peculiar small wind-blown furnaces. This technology was believed to have become extinct at the turn of the 20th century. Historical literature cites the huayrachinas as being an indigenous technology local to the Bolivian Andes. This paper is an overview of the historical and ethnographic records of huayrachina use throughout the last 500 years. It also contains initial results of analyses from a current smelting site. The paper focuses on the history and technological efficiency of the huayrachina.