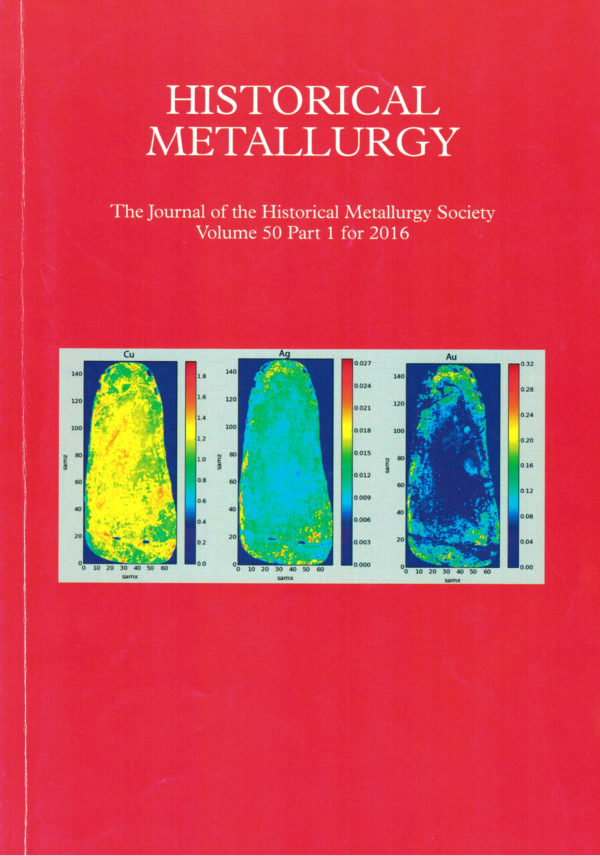 Ulvöspinel-bearing iron slags of Hellenistic age from near the Rosen copper mine, Eastern Srednogorie, Bulgaria

A mineralogical study of slag of the Hellenistic period from near Cape Atiya on the Black Sea coast between Burgas and Sozopol has shown that these are iron slags consisting mainly of ulvöspinel, titanowüstite, kirschsteinite, and kalsilite. The abundant presence of ulvöspinel in the slag and its high vanadium content, suggests that the iron ore employed contained magnetite mixed with titanite derived from the disintegration by weathering of the monzonites and syenites of the Rosen pluton. The dominance of kirschsteinite over fayalite in the slag, along with rounded grains of magnesiochromite and the presence of zirconium in the slag, suggests the ore was a locally-derived shelly beach sand.

A multi-stage archaeometric analysis was undertaken of 22 hammered metals recovered from the Cenote Sagrado at Chichén Itzá, Mexico. These objects include sandals, axe-monies and tweezers. All metals were examined with optical microscopy (vis-UV-IR) for comprehensive documentation and with pXRF for determination of bulk composition. Finer resolution analyses, including RBS, SR-XRD and SR-XRF, were conducted on particular objects. Eighteen objects are Cu-Au-based, while the axe-monies and tweezers are Cu-based. At least two sandals were finished with electrochemical replacement gilding. Secondary alterations to the metals, from indentations to wrinkles, suggest that the objects were re-fabricated over time. The presence of particular compositions and fabrication techniques indicates that objects continued to be deposited in the Cenote several centuries after the main occupation of Chichén Itzá (AD 750-1050).

‘Not even if we had offered him £50’: Early crucible steel production and the history of the Huntsman process

The early records of the Huntsman crucible steel process are sparse and unsatisfactory. Until recently information on the early process had to rely on the often ill-informed speculations of the various visitors or the cryptic comments of the Sheffield crucible steel makers themselves. Excavations at Riverside Exchange in central Sheffield have recovered quantities of crucible debris from contexts dating before the 1790s. The crucibles are of refractory clays in the form of mullite, tempered with graphite. The slag on the interior of the crucibles contains appreciable quantities of manganese suggesting that manganese dioxide was already being added as a flux. The role of manganese through the ages in the production of steel is discussed. In the light of this new information the paper reviews the likely origins of the Huntsman process and of its successors, with especial reference to the central and south Asian processes.

In search of Samuel Penn, ironworker

This paper is an account of Samuel Penn and his assistants, English ironworkers who travelled to Russia in the 1830s at the invitation of the Russian government. Penn’s particular responsibility, when he travelled to Russia in 1831, was to introduce the puddling process.  Together with two other British assistants, he successfully demonstrated the process in a Urals ironworks in 1839, using firewood as a fuel rather than charcoal or coal.  In spite of their achievements, virtually nothing is written in the English language about either Samuel Penn or his assistants: they are viewed as men of some importance by several Russian historians, however, in view of the importance of the puddling process as a precursor to industrialisation.  This paper summarises information available from those Russian authors whose publications are available either electronically or in British libraries, appended by entries in English censuses and records of births, christenings and marriages.

In 2010 an archaeological evaluation was undertaken by Channel 4’s Time Team at Derwentcote, County Durham, the site of one of the best examples of how the ferrous metal industry evolved in Britain during the Industrial Revolution and now a Scheduled Ancient Monument. The results of the evaluation, along with analysis of the crucibles and metallic residues, are of significance in providing information on the 19th-century crucible steel operation at Derwentcote, the first such installation to have been excavated outside Sheffield.