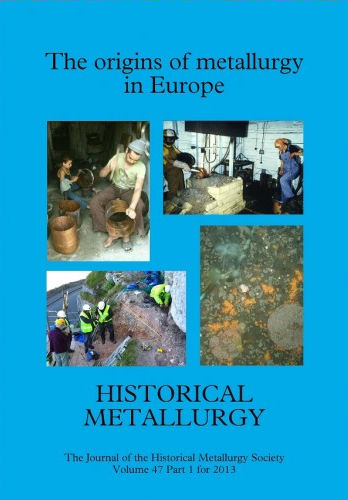 Archaeometallurgy 1962-2013: The establishment of a discipline

This paper charts the development of archaeometallurgy through the last fifty years. The situation existing in the 1950s is described, followed by the principal developments through the succeeding half century, with some achievements, continuing problems andfuture directions outlined. The paper is mainly focussed on early mining and extractive metallurgy in the British Isles and Europe, and covers topics such as excavation, scientific examination, provenance studies, ethnographic recording and experimental replication. Much has been achieved through the life time of the Historical Metallurgy Society, but there are still plenty of challenges ahea

Archaeometallurgy of the Vinca culture: a case study of the site of Belovode in eastern Serbia

The site of Belovode came to fame within the archaeological community with the discovery ofthe earliest metallurgy so far known. Tlie evidence is several pieces of copper slag dated to c5000 BC (Radivojevic et al 2010). Extensive compositional, microstructural andprovenance analyses of this material showed a consistent smelting technology over the c400years of the site’s occupation. This paper provides a detailed analytical account of 12 further samples fi’om Belovode indicating copper mineral use and  archaeometallurgical activities. Particular emphasis is given to production debris from the ‘metallurgical’ Trench 3, although other significant metallurgical contexts are also included. The overall aim is to investigate technological relationships between the specimens presented here and those previously published by Radivojevic et al (2010). Their technological associations provide a more coherent image of the archaeometallurgical activities in this part of Eurasia at the dawn of metallurgy.

Early metallurgy in the central Mediterranean: Goals for the next decade

The article’s aim is to foster an interdisciplinary debate regarding the direction that archaeometallurgical studies in the central Mediteiranean region, from the late Neolithic to the Early Bronze Age (c4500-1650 BC), ought to take in the next decade. It is argued that early metallurgical studies in the area have followed an idiosyncratic course due to the sway held on the discipline by Idealism, an influential pilosophical movement that greatly hindered the development of science-based archaeology until the late 20th century. The last fifteen years, however, have witnessed an imprecedented if rather tumultuous expansion of metallurgical research, and important advances have been made in the chronology and chaine operatoire of early metal technology and artefacts. Yet it is the author’s contention that, in order to reap full benefits from the recent disciplinary growth, an explicit research agenda must be set. Above all, it is argued that the new agenda must be grounded in the cross-disciplinary examination of the materiality of metalwork, hitherto poorly explored in this region.

The University of Padova has developed a geochemical database for the Alpine copper mines which contains lead isotope data for most of the copper deposits in the Western Alps and Italian Eastern Alps, besides a number of other geochemical tracers for selected deposits. The database fills an existing gap in available reference data and provides infonnation for the geochemical interpretation of the mineral deposits. It is of course also an important reference for archaeometric pwposes, to provenance the mineral source of slags and metal objects. Several Alpine copper deposits may now be successfully discriminatedfrom those of other European and Mediterranean mining areas. The results obtained on a number of Copper Age and Bronze Age metal objects are presented. A few objects made with copper ores of South-East Alpine origin have been positively identified for the first time, though the data also indicate a wide circulation of copper metal possibly originating from ore sources outside the Alps.

In the mining and metalhirgical district of Cabrieres-Peret in SE France the earliest evidence of metallurgical activities has been discovered, with calibrated radiocarbon dates spanning the 3rd millennium BC. La Capitelle du Broum is the most important Chalcolithic smelting site, located less than one kilometre away from some mines. Systematic excavations have uncovered numerous open fire structures used in metallurgical processing of the local copper ores. The hearths are roughly circular hollow pits from which numerous pieces of ore, slag and metal drops have been collected. A representative selection of such materials have been systematically studied using SEM, XRF and metallography. From this we can define a metallurgy ofprimitive features consisting of the direct smelting of oxidic-fahlore-type complex minerals, which produced pyroxene slag retaining much copper. Tlie metal obtained is copper containing substantial quantities of antimony, silver and other substances, characteristic of this region.

The beginnings of metal production in Britain: a new light on the exploitation of ores and the dates of Bronze Age mines

Archaeological investigations have identified eleven sites of Early-Middle Bronze Age copper mining. Including the Great Orme, there are now more than 100 radiocarbon dates from these prehistoric workings in England and Wales, which when statistically modelled have provided some indications of the sequence of exploitation, and a chronology of production. Prospection and small scale mining for copper begins in west-central Wales at the end of the third/early second millennium cal BC, and then spreads eastward, with mining on the Great Orme reaching its peak in the Middle Bronze Age. The subsequent decline in production may coincide with the arrival of recycled metal from the continent, much of which may be coming from new Alpine sources. The indigenous development is then compared with those in Ireland, Iberia and the Alps. Britain’s fairly imiquepathway in this respect is interesting, with seemingly no evidence for the mining of chalcopyrite and the consequential development of sidphide metallurgy during the British Bronze Age

Linking the Great Orme Bronze Age copper mine to British metalwork by analysing ores, copper prills from Pentrwyn and particles of bronze found in the mine is an on-going project. This paper focuses on the smelting slags and prills recovered during the 2011 excavations from the Pentrwyn site, the only smelting site known from the British Bronze Age. They indicate the use of a simple smelting process which used secondary carbonate ores with only residual sulphides. The unusual slags are low in silica, like the ores, and lack any additives which residted in only a small amount of glassy phase being produced. Hence, the copper prills must have been recovered by crushing, which matches the small size of the slag pieces. Lead isotope results link the slags to the Great Orme ores. The analyses of the copper prills show variable trace element levels, sometimes with significant levels of arsenic and nickel, consistent with a proportion of British Bronze Age metalwork.