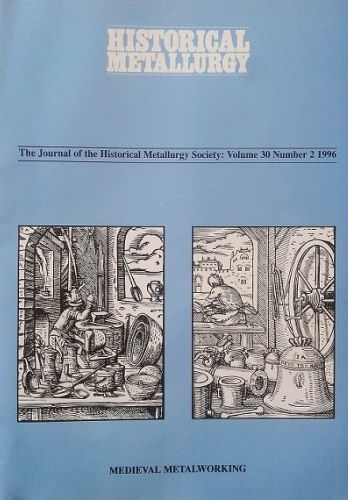 Archaeological excavations provide a valuable source of information about medieval metalworking. Most metalworking (apart from smelting) was carried out in towns. From the 13th century there were a number of changes in metals technology; some archaeological evidence for these developments in England is presented.

Bell and Cauldron Founding in Exeter

Excavation of four sites in Exeter has yielded a large body of new information about the bell and cauldron founding industry in the city from late in the 12th century to early in the 18th century. Particularly important discoveries have been two casting pits with remains of multiple bell castings, a well-preserved mid-17th-century reverberatory furnace, and large quantities of waste cauldron mould. The sites are described briefly and a summary presented of the documented founders. Particular attention is paid to areas in which the discoveries contribute to the understanding of the processes involved in this major medieval and post medieval industry. Some of the key finds are also described and illustrated.

Metalworking evidence in London includes plant, ingots, clay moulds and wasters for dress accessories apparently from a copper-alloy foundry probably of the early 13th century. There is a variety of seemingly usable copperalloy accessories discarded at the waterfront, still joined from casting and presumably from a single workshop of the 14th century, and a dump of clay moulds and crucibles for producing candlesticks in the 17th century. Further manufacturing waste provides details of the processes of working sheet copper alloy, and casting various lead/tin items, and there are also limited hints of precious-metal industries and enamelling in the late medieval period and the 16th century.

In the context of an assessment of the role of metalworking and the trade in metals in pre-modem society, and of their contribution to the fortunes of towns, the paper outlines the social, economic and spatial characteristics of the metal trades in medieval (c. 1000-1500) London, especially with a view to assisting the interpretation of the rich material evidence from the city. Emphasis is pladed on the significance of marlcets, rather than simply the availability of raw materials, in determining the pattern of metalworking trades (both retailing and manufacturing) within London, and in providing the opportunity for the city to establish itself as a centre of national, and at times international, standing. The relative wealth and status of different categories of metal workers and dealers are explained. Regulations offer insights into the technologies used. Discussion of quality control, the reputation of London products, and of the need to distinguish them from items made elsewhere leads to an explanation of the use of marks. The interdependence of different manual skills, retailing, and mercantile activity, together with the problems of environmental pollution, explain the organisational structure of the metal trades and their distribution within the city. The flow of raw metals from elsewhere in Britain and from overseas to London is described. The reasons for London’s high reputation in certain metalworking trades, and for the city’s loss of business at the end of the period, are discussed.

This paper attempts an overview of archaeological and archive sources for all types of metalworking in a Midlands town of moderate size.

Excavations in Worcester during 1988-9 revealed a large and well-preserved bronze foundry. Of 14th-15th century date, the foundry comprised several furnace structures of tile and stone with adjacent casting pits. Extensive deposits of casting mould were recorded and this indicated that the major activity of the foundry was the production of domestic vessels with bell making a secondary concern. Small items were also produced at the site using stone moulds and crucibles. Typologically dated to the 15th-16th century, the flat-based crucibles were for melting brasses which were used in the production of pins, wire and small castings. Plentiful finds of sheet metal offcuts indicate wrought metalworking was also undertaken at the site.

Dinanderie has been a very important industry in the lands of what is now Belgium, which formerly consisted of the Southern Netherlands – ie most of the counties of Handers, Hainaut and Namur, the duchies of Brabant and Luxembourg – and the Principality of Liege. There were many workshops in different cities, whose surviving products consist mainly of large and small civil and ecclesiastical furniture (for example, statues, canons, etc).

Itinerant craftsmen, permanent smithies and the archbishop's mint: the character and context of metalworking in medieval Trondheim

Recent excavations in the medieval town of Trondheim, Norway, have produced a varied range of archaeometallurgical evidence which is closely locatable in time and space. This paper presents and discusses this evidence in the context of the town’s development — from the 10th-century kaupang to the early 15th-century precinct of the Archbishop’s Palace – charting the character of metalworking practices and their organization within a dynamic socio-economic environment. The earliest urban metalworking principally took the fonn of intermittent small-scale casting of prestige products within the urban core. During the 12th century a dramatic technological and organizational transformation took place with the establishment of an extensive metalworking quarter on the urban periphery. Permanent iron-smithing and nonferrous metalworking were conducted here on an unprecedented scale until the mid 14th century, at which time this centralized plant ceased production. During the early 1500’s a small community of specialist craftsmen, including moneyers and weapon manufacturers, was established in the precinct of the Archbishop’s Palace.

‘We would call the attention of students of the history of chemistry to these early 16th century attempts at analytical chemistry; for in them he the foundations of that science.’ (Hoover and Hoover 1912, 220).

Alchemy and fire assay use similar, often even identical ceramic vessels, tools and techniques, but have very different aims. For the interpretation of such finds from archaeological excavations it is hence often difBicult to differentiate properly between these early chemical activities. The investigation of 16th century material from Cologne is used as a case study to develop valid scientific criteria to assign an archaeological complex of crucibles, ceramic and glass vessels to one specific craft. Among the possibilities discussed – glass and glaze working, alchemy, gold working – the evidence points to a goldsmith’s workshop with a high degree of probability.