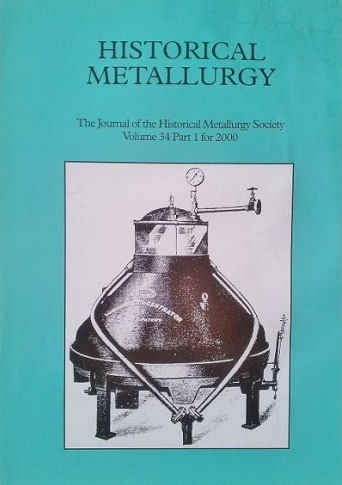 In a recent paper, Bick (1999) questions whether the Bronze Age mines discovered in mid-Wales were exploited for lead, or lead and silver, instead of copper and re-considers whether the ores were used for metal smelting. We present a short review of recent archaeological evidence and geochemical data fi’om a blanket peat located close to the Bronze Age mine at Copa Hill, Cwmystwyth in order to consider the ideas presented by Bick. Increased copper concentrations in the peat profiles coincide with the known tenancy of the Bronze Age mine suggesting that the miner’s primary interest was to obtain copper Archaeological evidence suggests that copper was extracted in thefoim of chalcopyiite from the copper-lead-zinc sulphide veins. Only low concentrations of lead and silver are recorded in the peat and this evidence raises doubts over the mining of lead and silver at Copa Hill in antiquity.

TheTjitsma (Wijnaldum) die: a 7th century tool for making a cross-hatched pattern on gold foil, or a master template?

Excavation of the dwelling mound of Tjitsma in Friesland produced an important small bronze die with a geometric cross-hatched pattern. The pattern was recognised as being very similar to those on gold foils commonly found in gold and garnet jewellery of the 6th-7th centuries, fivm both Merovingian and Anglo-Saxon contexts. It is the first die to be found with a ‘boxed’ pattern. The die is a lost wax casting and isfidly described here, with the pattern compared to gold foils in garnet jewellery. It is in a ‘positive ‘fom which makes it unusual, because patterned gold foils were generally thought to have been punched with negative dies. The method of producing the model of the complex pattern for lost wax casting is investigated. Danish dies of simpler pattern are also described.

The history of non-ferrous metallurgy in Slovenia

Modem Slovenia, and the adjoining parts of some neighbouring countries inhabited by Slovenian people, has a rich history of mining and smelting of non-ferrous metals. Lead was produced from the 13th century in Southern Carinthia and flourished during the 17th century. The Bleiberg smelter at Villach was for a long time the most important in the area; the Camiolan process described by Agricola was used there in the 16th century. Another important centre was in the Mezica valley, and there was small scale mining and smelting also in Camiola near Ljubljana. Zinc smelting started in Carinthia in 1799 and in Zagorje in Camiola in 1843, but the main centre was at Celje in Camiola which produced zinc from 1875 to 1970 using horizontal retorts. Mercury yvas extracted atldriga in Camoliafivm 1490 and the place became renowned for the excellence of its mining and smelting technologies. It flourished for over 500 years, producing in total about 13% of the world’s mercury output. Aluminium production is a recent industry which continues today. Minor copper and antimony production is also recorded.

The Elmore brothers and the flotation process for separating minerals

To extract copper fivm ore broken near Dolgellau, North Wales, c 1898 Frank Elmore developed a technique of selectively transferring minerals fivm water into oil. Frank and Stanley Elmore began to exploit bulk-oil flotation internationally, but soon alternative schemes emerged in Australia and Europe and the brothers became involved in damaging litigation with rivals. Frank Elmore invented an improved technique, using less oil and with vacuum-generated bubbles; vacuum flotation was installed in North Wales c 1907 and applied in Australia, Norway and Canada. From 1910 related systems of froth flotation beyond the Elmore’s control were introduced in the Americas and elsewhere. As the 20th century progressed, both the scale and scope of flotation treatment increased, so that it became the preponderant mineral-separating method. The pioneering contributions of the brothers are set in context.