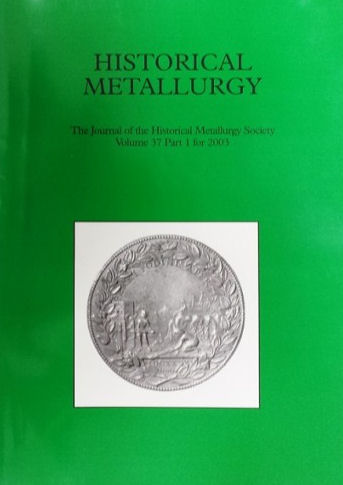 Oral traditions about early iron-working in the Caucasus mountains

The origin of the smelting of iron is usually attributed to regions to the South and East of the Black Sea. This paper details some oral traditions from the Caucasus Mountains describing the early development of the processing of iron and steel. Most of the mountain regions had no writing until less than a centuiy ago, so the oral records cannot be scientifically dated, but comparison with archaeological and other data suggests that they date from the early development of iron, at the beginning of the Iron Age.

A selection of 37 Song dynasty Chinese cast iron coins was subjected to metallurgical analysis. From inscriptions, these are dated between 1078 and 1215 AD, and the mint locations of 23 of the coins are known. All were found to be white cast irons, but they separated into two types, one with relatively high levels of silicon, phosphorus and sulphur and divorced eutectic micro structures, and the other with low levels of these three elements and ledeburitic microstructures Those coins that were minted in Shaanxi were all found to be of the first type, while those minted in the Hubei/Anhui region to the southeast are all of the second type. On the basis of sulphur content it is believed to be likely that iron used for the first group was smelted in coal- or coke-fired blastfurnaces, while the iron in the second group was smelted using charcoal. This is in general agreement with what is known of the iron industry in China during the Song period.

Chinese blast furnaces from the 10th to the 14th century

The Chinese ‘Commercial revolution’ of the 11th century was accompanied by a number of important technical developments. In the iron industry, the last major advances in blastfurnace design were made. Water power was widely used for the blast, and coal and coke began to take the place of charcoal for the fuel. New blast furnace structures came into use, in some cases foreshadowing early European designs and those known from the traditional Chinese iron industry of the 19th and 20th centuries. TJiis article reviews the available evidence on the construction and operation of iron blastfurnaces in the Song and Yuan periods (960-1279, 1279-1368), with special reference to the use of mineral fuel.

The development of trompes in pyrometallurgical plants in the Papal State

Hydro-aeolian trompes, instead of water-wheel driven bellows, were widely used in Italian metallurgical plants up to the 19th century. They provided a blast of wet air suitable to feed the tuyeres ofpyro-metallurgical plants. The air was drawn by Venturi effect into a falling stream of water, separated in a barrel after a fall of 5-10m and carried in a pipe at a pressure of less than Im of water (10kPa). Two examples are given of the application of the trompe, to an iron blast-furnace and to a lead cup ellation furnace in the Papal State at the end of the 18th century

Interpretation of artefacts from Thomas Jefferson's nailery at Monticello, Virginia

Laboratory analyses of nails, nail rod, and hoop iron from Tliomas Jefferson’s nailery at Monticello, Virginia, yield information about the methods used and the products made at American rolling and slitting mills in the early years of the 19th century. The iron, made by fining pig, is nearly free of phosphorus. It is relatively soft and ductile, having a tensile strength of290 MN/m2 and a reduction of area of 62%. Critical grain growth found in the hoop iron indicates that the metal was at a temperature of about 840°C during its last rolling pass. Rolling conditions produced an unusual pinch-and-swell structure in the slag inclusions. Bending at the edges of the nail rods indicates that the clearance between the slitter discs was about 20% of the nail rod thickness. Ferrite veining in the rod suggests that the iron passed through the slitters at a temperature between 600 and 700°C.

The Queenstock furnace at Buxted, Sussex: the earliest in England?

Recent work suggests that Queenstock furnace at Buxted dates from at least as early as 1491. It thus predates the 1496 blast furnace at Newbridge in Hartfield, hitherto accepted as the first to be established in England.