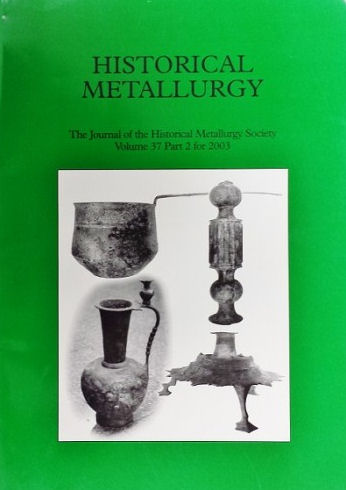 Fifty-one bloomery iron smelting slags from four sites in the Nsukka Division of Nigeria have been characterized. Radiocarbon dating has shown that smelting in this area took place over about two millennia. The chemical compositions of typical phase mixtures and individual phases were determined using EDS analysis in an SEM, and phase proportions were obtained fivm the SEM back-scattered electron images and by point counting of optical microscopy images. All the slags were essentially contained within the Al2O3-SiO2—FeO ternary system, with the major phases being fay alite, hercynite and glass, with wUstite in some of the earlier slags. The liquidus temperature of the slags could be inferred from the ternary diagram. The earliest slags, which had high liquidus temperatures, could have been made directly from ore currently found on site; these slags were tapped into slag pits. Later slags had lower liquidus temperatures and in general could not have been made fivm current ores; they were raked out of the furnace as agglomerates. Mass balance calculations showed that the later slags were associated with a higher output of iron per unit of charged ore. The change in liquidus temperature is associated with a change in smelting technology from forced draught to natural draught furnaces, and a change in slag removal method. It is concluded that ore sizing was carried out at all the sites, and that sand or ore fines were added to the burden at the later sites.

From Damascus to Denia: scientific analysis of three groups of Fatimid period metalwork

A selection of 153 Fatimid period (11th-early 12th century AD) copper-alloy objects fi-om three of the four major archaeological assemblages were analysed by ICPAES. Five alloy types were identified and these are found to correspond well with the alloys mentioned in the contemporary literature. One group, made of high-tin bronze, was subjected to metallographic examination. Objects from all three sites have identical chemistry, although four compositional groups were identified on the basis of trace elements. However, these do not correspond to the geographical find spots, but to stylistic criteria. Lead isotope stiidies were used in conjunction with trace elements to clarify the likely origins of some of the objects. Tlie results allow discussion of the production and distribution of copper-alloy metalwork within the medieval Islamic world

A sizeable number of inclusions in three wrought iron cable wires used in the Wheeling Suspension Bridge (circa 1849) were investigated by energy dispersive spectrometry X-ray analysis so as to profile their frequency and distribution as well as composition. Significant differences in the inclusion chemistry for the wires were obtained that indicate the ore may have come from different sources and/or was processed differently and possibly at more than one venue. The findings are consistent with the manufacturer’s handwritten agreement found in the Wheeling and Belmont Bndge Company manuscript archives.