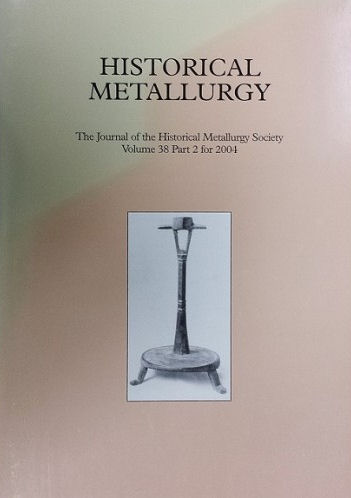 A hindered-settling model applied to the flat washing platforms at Laurium, Greece

The flat-washing platforms, prominent in the processing of silver-lead ores at Laurium, Greece in the 4th century BC, were probably not designed to work with sluices as proposed by Conophagos (1980). Rather, the stand tank at the rear of the platform was a primary settling basin and the ancillary system of channels and settling basins served as a staged operation to collect concentrate throughout a closed circuit. A hindered-settling model is proposedfor the effective separation of lead minerals from the gangue. Ceramic bowls were used in a vanning process to evaluate the degree of liberation and separation of lead minerals at the ore-processing workshops.

Copper-alloy objects of the medieval and early post-medieval periods were analysed to establish whether there was any pattern to the alloy compositions used, as a function of object type, or date or place of manufacture. Objects from NW Europe, of 12th-17th century date and mostly at least partly utilitarian, showed compositional correlations, to the extent that characteristic compositions were identifiable for some regions for the late medieval and early post-medieval periods. A method is presented of displaying compositions graphically which proved useful in exploring the phenomenon of alloy evolution. The use of scrap metal of unknown pedigree seems not to have been usual; the few instances of such practice can usually be recognised. It has been shown that dating and provenancing (in broad terms) is possible for many object types using alloy compositional data.

L A Pavlish, R G V Hancock and B Ross

Thirty-two copper-based metal samples fi’om the Bead Hill site in southern Ontario were analysed by neutron activation analysis. All of the samples are of European origin, with thirty-one brass samples and one copper sample. There are fivm five to seven different trace-element chemistries. Given that a brass kettle can consist of two or more different brasses fie the body and the two lugs) with copper, brassy-copper or brass rivets, it is possible that the material came from as few as two to four brass kettles. Similarities of one of the Bead Hill brass chemistries to material from the earlier Robitaille site in Huronia indicate that material curation was the source of this potential ‘trade connection’.

The patent awarded to Thomas and George Cranage in 1766 has long been considered an important precursor of the puddling process. This article re-assesses the evidence for the Cranage process and considers whether it had any influence on subsequent technological development. Questions are raised about the development of technology in the wrought iron industry and the way in which the evidence has been interpreted by historians and archaeologists. It argues that the reputation of the Cranage brothers has been enhancedby their association with the Darby and Reynolds families of Coalbrookdale. It goes on to caution against over-reliance on patents as an index of technological development, and to question whether technology derived from an environment of empirical skills can be said to have had a single inventor.

This paper examines a unique document, the pocket book of a worker at Noah Hingley and Sons’ ironworks at Netherton, near Dudley. This book (in a private collection) records the ingredients for the different types of puddled iron produced by the firm during the years 1891-1893. Hingleys were famous for their chains and anchors, and prided themselves on the superior tensile strength and anti-corrosion properties of their wrought-iron chains and cables. The notebook makes it clear that differentiation between ‘best’, ‘best best’ and other grades took place at the puddling stage rather than during subsequent forging; many of the mixtures described can be associated with different grades advertised by Hingleys at the time

The Queenstock furnace at Buxted, Sussex: the earliest in England?

Recent work suggests that Queenstock furnace at Buxted dates from at least as early as 1491. It thus predates the 1496 blast furnace at Newbridge in Hartfield, hitherto accepted as the first to be established in England.