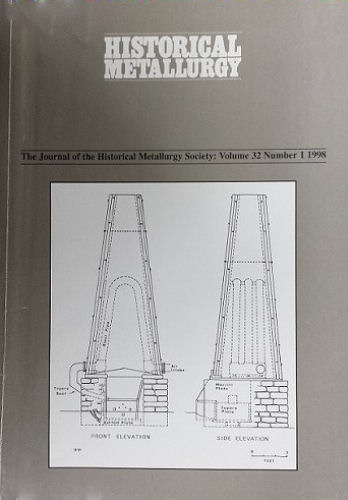 Two socketed and five shaft-hole ferrous axeheads were examined by metallography and electron probe microanalyser Specimens from the cutting edges revealed low carbon compositions although two and possibly a third showed evidence of secondary (surface) carburization. All had been cooled naturally during their final heating cycles.

This paper reports the discovery and examination of an early example of crucible steel in the collections of the British Museum. This is a Sasanian sword, dated to the 6th-7th century AD. The sword is considered in relation to other new discoveries in the early history of crucible steel, suggesting, as a material, it may have been much more widely used and at an earlier date than previously supposed.

The bloomery mounds of the Scottish Highlands. Part 1: the archaeological background

Photos-Jones, J A Atkinson, A J Hall and I Banks

The ubiquitous presence of bloomery mounds in the Scottish Highlands and the speed of their destruction by forestry, agriculture and animal husbandry, combined with the limited understanding of the industry that produced them, has stimulated a one-year pilot investigation aimed at the development of a methodology for their study and means of preservation. Five disciplines (archaeology, history, geology, geophysics and archaeometallurgy) provided the foundations of three separate phases of activity to include (a) the evaluation of documentary sources, (b) the assessment of the mounds and their immediate natural environment by geological, geophysical and archaeological means of prospection, and (c) the scientific examination of potential ore sources and industrial waste. Three phases in bloomery making were revealed: traditional small-scale production, traditional large scale and advanced large-scale (probably making use of water power) at three different locations in the Highlands. Each displayed its own characteristic features, some uniquely Scottish. This paper presents the results of the work so far, and aims to put the Scottish Highland bloomeries back on the archaeometallurgical map. The work has been made possible through the generous support of Historic Scotland. This paper is the first of two parts; the second, to appear in a future issue of Historical Metallurgy, will be dedicated to Scottish iron ores and the mechanism of their formation, with particular reference to bog iron.

Research into the company records and correspondence of the Clintonville, New York, iron works (1824-1890) has revealed that bloomery forge management had a constant concern for improved efficiency and economy in iron production. This concern is evident in several aspects of forge operation, including experimentation in the application of hot blast, the size and number of tuyeres in bloomery forges, recovery from river sands of ore lost in the separation process, the employment and modification of new techniques of processing raw ore, and the utilization of waste heat from the forges. It is also evident that information about developments in the industry spread rapidly from one region of the US to another, as well as across the Atlantic. Adirondack bloomery forge production of iron in the 19th century is thus seen as having been a dynamic and creative endeavour that made significant contributions to the industry overall.