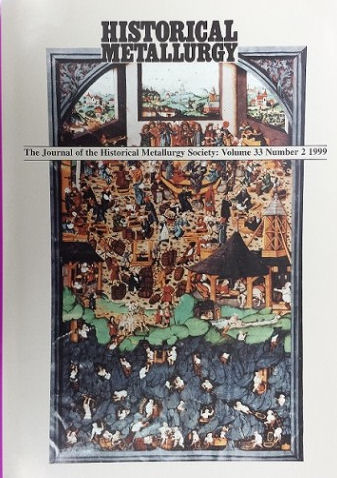 The characterization and provenancing of ore, slag and iron from the Iron Age settlement at Snorup

A large iron production site from the Iron Age has been identified at Snorup, Jutland, Denmark. Typical slag-pit furnaces have been excavated which are related to similar iron furnaces in middle Europe. The Danish bog iron ore is rich in phosphorus, and so is the extracted bloomery iron, up to 0.6% phosphorus having been recorded in solid solution in the iron. On the site a hoard with bars of two different types were found. From metaUograpMc analysis and comparison of slag analyses it is argued that the hoard represents iron of two different origins. Six massive wrought iron bars are rich in phosphorus and are of local production, while about 200 slender bars appear to be of ferritic-pearhtic steel, imported from southern Norway. These Norwegian bars are small (20-160g) and have a characteristic spoon shape, which for the ancient craftsman would mark them as useful for steeling tools and weapons.

Romano-British iron production in the Sussex and Kent Weald: a review of current data

A succession of studies over the past sixty years has shown that iron making was well-developed in the Weald in the Romano-British period. Distribution maps showing the extent of the industry in the region have not, hitherto, attempted to indicate a measure of output for individual sites. This revision of data provides such an opportunity.

Excavations at a Medieval mining settlement in north-west Germany produced a series of metallurgy-related finds, including ore, slag, lead bullion and silver coins. These were analysed by various methods to establish their relationship to one another, in order to reconstruct the lead smelting process. The mineralogical analysis of ores and slags, and particularly of inclusions of matte, speiss and metal trapped in the slag, led to an estimate of roasting and smelting conditions. The analysis of lead isotope ratios of several of the finds further revealed two distinct strands of smelting, indicating the treatment of silver-rich ores separately from the bulk lead ore. This evidence underpins current historic research on the organisation of medieval metal rnining and extraction in Central Europe in general, and illustrates the benefits of interdisciplinary research integrating archaeological, scientific and historical approaches alike.

Countess of Sussex Mine, south-east Baffin Island, was worked for two weeks in August 1578, during which time it produced 455 tons of rock, which were loaded on to seven small ships and sent to England. It was Frobisher’s largest mine and reputedly rich in gold and silver. The ore was mainly metamorphosed ultramafite (black ore) and subsidiary metamorphosed (garnetiferous) mafite (red ore). It extended, intermittently, 1400 metres across two peninsulas. A representative half-ton assay, made in England in 1579, gave disappointing but far from negligible returns. However, even these results (rate of 1.2 ozAu/T) were flawed by incorrect techniques and mistakes in calculation. According to recent analyses, the gold result was about 10,000 times too high. This assay dashed the last hopes of the mining adventurers. The metallurgical plant at Dartford, Kent, soon closed, the Countess of Sussex deposit was forgotten, and the raining escapade came abruptly to an end.

This paper describes the marks registered by metalworkers with the Cutlers’ Company in Hallamshire, in terms of their value as an aid to dating artefacts. Given such source material as the mark books, it has been possible to devise a descriptive system for the marks which allows them to be entered in a simple database. The craftsmen whose marks are described here were the cutlers, scissorsmiths, shearsmiths, sicklesmiths, scythesmiths, awl bladesmiths and filesmiths for the period 1614-1878. The word ‘cutler’ is used as a generic term, unless specified.

The relation of hardness to strength in high-phosphorus iron wire

For steel alloys regardless of composition there is an accepted relationship that allows an estimate of strength from ftie measured hardness. This relationship is useful because microhardness testing can be done on samples that are too small for tensile tests. However, the measured strength of high-phosphorus low-carbon iron that has been strengthened by work hardening diverges from these standard values, being stronger for a given hardness than predicted.