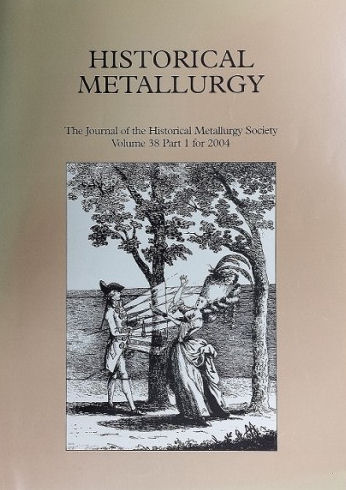 Los Callejones: a Roman Republican iron mining and smelting centre in the south east of the Iberian Peninsula

An iron mining and smelting site dated of the Roman Republican period (1st century BC) has been recently discovered in Almena province, Spain. Archaeometallurgical remains consist of iron ore, smelting and smithing slags, furnace lining fragments and iron blooms. Analyses have been performed using SEM/EDAX and optical microscopy. The ore was very pure goethite. Tapped slags are fayalite-type also containing calcium and manganese, produced in small shaft furnaces of about 500mm in diameter. Calcium-rich sand was used as flux. Analytical results are reviewed in the light of late Iron Age and early Roman iron technology.

A group of 19 Chinese cast iron objects, mainly statuary and ritual objects, dating from between the 8th and 19th centuries AD, has been subjected to microstructural and compositional analysis. The objects were found to represent a range of cast iron types, including white cast irons with both divorced eutectic and ledeburitic microstructures, ferritic andpearlitic grey cast irons, and mottled cast iron. The microstructure of each object was found to be explicable by the chemical composition of the iron, especially its silicon, phosphorus and sulphur contents. The different chemical compositions can be accounted for by different smelting conditions, such as the use of coke or charcoal as furnace fuel, and the smelting of iron ore from different ore bodies. The sulphur contents, while not providing definitive evidence, suggest that at least some of the cast irons were smelted using coal or coke rather than charcoal. Where it was possible to tell, specifically for the white and mottled irons, the objects had been cast using the piece mould process. This work increases appreciably the corpus of analytical results for Chinese iron of this time period.

The archaeological evidence for medieval and post-medieval casting of large domestic vessels in England is reviewed. This consists of archaeological features, waste products and the finished artefacts. The distinctive nature of the alloy used (an antimony-rich leaded copper alloy) is discussed. It is argued that this alloy was a waste product from the extraction of silver from fahlerz ores.

This paper describes the examination of two ferrous Islamic mirrors. One is of very pure iron but the other would appear to be of crucible steel, confirming contemporary descriptions that mirrors were of steel. The methods by which the steel could have been produced and the mirror fabricated are discussed. Recent work has shown that crucible steel was used for a wider range of artefacts than previously appreciated and its use for mirrors reflects another property of the metal that was utilised. Crucible steel as a bright material was certainly appreciated in 18th century Europe, when one of the first uses of crucible steel was as the source material for the imitation diamonds known as ‘brilliants’ that featured so much in costume jewellery of the period

This paper examines a unique document, the pocket book of a worker at Noah Hingley and Sons’ ironworks at Netherton, near Dudley. This book (in a private collection) records the ingredients for the different types of puddled iron produced by the firm during the years 1891-1893. Hingleys were famous for their chains and anchors, and prided themselves on the superior tensile strength and anti-corrosion properties of their wrought-iron chains and cables. The notebook makes it clear that differentiation between ‘best’, ‘best best’ and other grades took place at the puddling stage rather than during subsequent forging; many of the mixtures described can be associated with different grades advertised by Hingleys at the time.